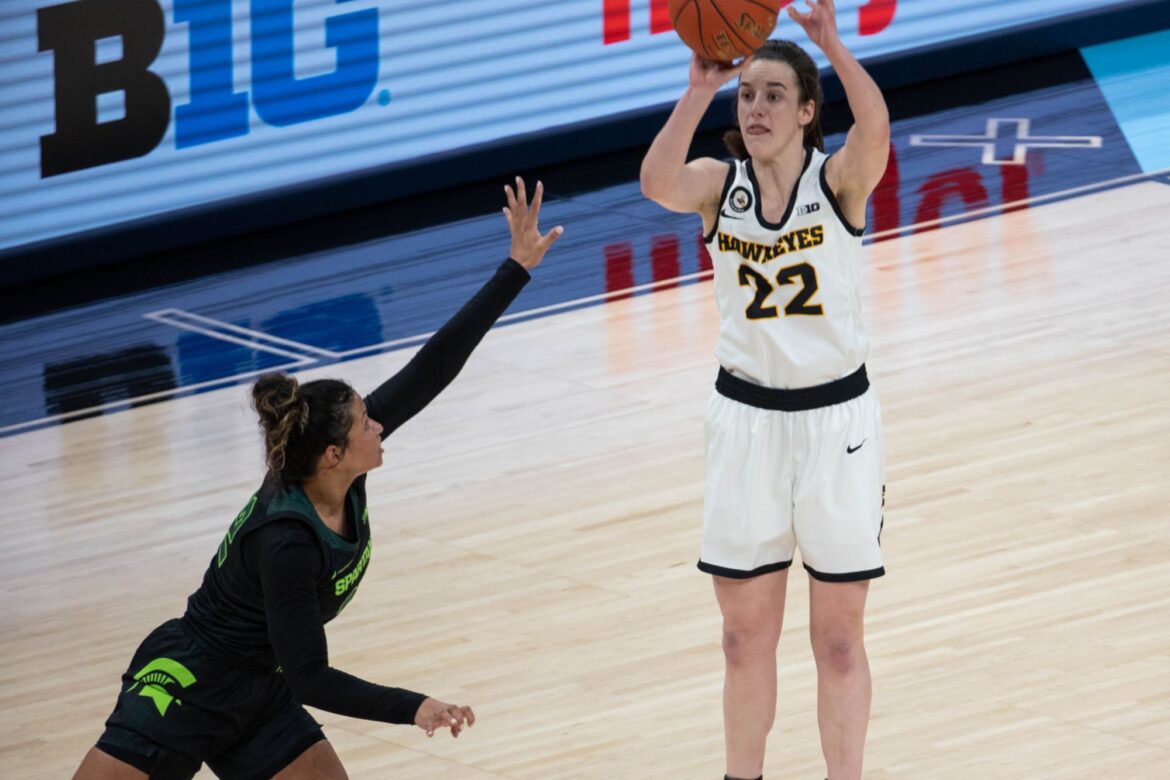 Iowa basketball star Caitlin Clark is taking the nation by storm, leading the Hawkeyes to a Big Ten championship while getting praise from LeBron James and Steph Curry.

Could Caitlin Clark beat LeBron James in a shooting contest?

“I don’t know about that,” she said when asked.

While she might have some humble doubt, the smart money would be on Clark. The Iowa star finished the regular season on an absolute scorcher of a hot streak, hitting 11-16 from beyond the arc.

Buckets aren’t the only thing dropping for Clark, as awards continue to fall into her lap. She was named the Big Ten Women’s Player of the Year while leading Iowa to a share of the Big Ten regular-season crown. She leads the nation in scoring averaging, 27.1 points-per-game and assists, scoring over 40 three times this season, with a high of 46, to go along with five triple-doubles.

Clark routinely fires away from well beyond the 3-point line — think Steph Curry with a ponytail. Her incredible range is years in the making.

“Growing up my Dad always made me work on the fundamentals of basketball, but I think it started honestly in high school,” Clark told FanSided. “I would get triple-teamed, double-teamed. I would just have to keep scooting further back and further back. Sometimes I don’t realize how far back I am.”

The basketball world has taken notice. LeBron James has done an Instagram story about her. Shooters like Trae Young have Clark’s back.

“I feel like I was just that little girl that was looking up to all of them and watching them on TV wanting to make the moves they are making or play like them,” Clark said. “I still look up to those players, I still watch them all the time.”

So who would win a 3-point contest between you and Steph?

“Probably Steph. I would just be happy to be there.”

Basketball fans would love to see that duel, perhaps for charity someday. Iowa City fans have been coming out in droves to see Clark play. The Hawkeyes’ final home game was a sellout of 15,056, the first sell-out at home since 1988. The atmosphere electric.

“My Dad texted me yesterday before we played he’s like enjoy every single second cause this is special you deserve it,” Clark said. “That is one of the reasons I came to Iowa because the fan support for women’s basketball is so amazing.”

If Clark was playing men’s basketball, she would in all likelihood be entering the NBA draft after the season and would be the number one overall pick in the draft. WNBA rules do not allow players to enter the draft until they turn 22. That means two more seasons at least for Clark at Iowa.

Truth be told, Clark does not mind spending a couple more years in black and Hawkeye gold.

Clark is also ahead of the game making money selling her name, image and likeness (NIL) rights. She is rightfully taking advantage of her own brand while lighting up the scoreboard.

Scoring and assisting both on and off the court.

Caitlin Clark is partnering with H&R Block and their “A Fair Shot” program that is committing $1 million to female college athletes in NIL sponsorships and support to level the playing field.