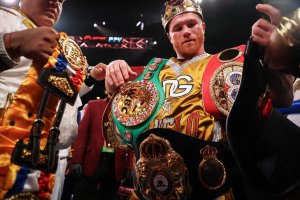 Saúl Álvarez never doubted that he would defeat Caleb Plant in their fight last Saturday night in Las Vegas. He did what he promised and thus became the first undisputed Latin American champion in history by retaining his World Boxing Association Super Middleweight Super Championship, the WBO and WBC belts, in addition to snatching the IBF title from his rival with a TKO in 11 rounds.

A great atmosphere at the MGM Grand accompanied “Canelo” in the achievement of his great dream of becoming the undisputed monarch at 168 pounds, and the pound-for-pound king of today gave a beautiful exhibition to win the fight.

The 31-year-old fighter and the first undisputed champion of the category in history came out with an aggressive style and was always on the attack. His way of cutting the ring was key to preventing Plant from using his best techniques, and worked with his body blows little by little to diminish the American boxer.

It was not an easy job but Alvarez was patient, he dealt with Plant’s incisive jab and was able to advance in his goal of damaging his opponent.

When it looked like the fight was headed for a decision, the Guadalajara man hit a strong combination of a left hook and a right uppercut that sent Plant to the canvas in round 11. Although the North American got up, he was badly hurt, and “Canelo” threw himself at him and attacked with everything he got to knock him down again with a straight right.

The referee considered that Plant’s condition was very bad and he did not give him the count, thus giving the Mexican the victory by TKO in the penultimate round of the fight.