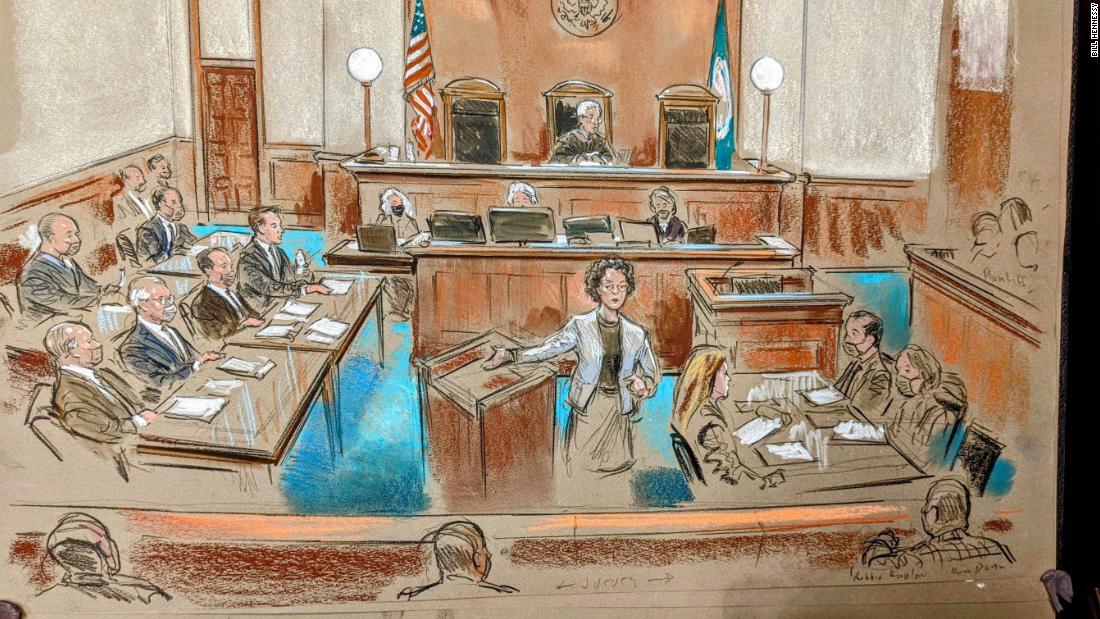 In Thursday’s closing arguments, attorneys representing the plaintiffs told the jury that the defendants prepared for the “Battle of Charlottesville” and messages sent between them and their actions after the violence were proof of a conspiracy.

“It’s up to you to demonstrate loud and clear, contrary to what you may have heard, that none of this is funny and none of this is a joke,” attorney Roberta Kaplan said.

Defense attorneys and two high-profile defendants who are representing themselves countered that none of the plaintiffs had proven the defendants had organized racial violence.

“Plaintiffs have to prove an agreement. An agreement isn’t a virus that can be passed around at a rally,” said attorney Bryan Jones, who represents three defendants.

The violence — which surrounded the Unite the Right rally to protest the planned removal of a statue of Confederate Gen. Robert E. Lee — reached a crescendo when James Fields, who was protesting the statue’s removal, drove his car through a crowd of counterprotesters, injuring dozens and killing 32-year-old Heather Heyer.

Fourteen people and 10 White supremacist and nationalist organizations are named in the lawsuit. Organizers of the rally are accused of engaging in a conspiracy to commit racially motivated violence and other harmful activities.

Some of the defendants never appeared in court and were subject to default judgments.

The plaintiffs, who include town residents and counterprotesters injured in clashes, are seeking “compensatory and statutory” damages for the physical and emotional injuries they suffered.

The jury must decide in each instance whether a defendant is liable for damages. In a civil trial, plaintiffs’ attorneys have to show a defendant is liable only by a “preponderance of evidence,” which means a 50.1% or greater chance of a claim being true, US District Judge Norman K. Moon told jurors.

In general, compensatory damages compensate (or make whole) the injured party for their loss or injury. Punitive damages are considered punishment when the defendant’s behavior is found to be particularly harmful, such as if the defendant intentionally engaged in willful misconduct.

Kaplan said the plaintiffs hit by Fields’ car are asking for $7 million to $10 million in compensatory damages and others are seeking $3 million to $5 million.

She did not give a request for punitive damages but instead asked the jurors: “What would it take to make sure the defendants and their co-conspirators never do anything like this again?”

The jury is scheduled to begin deliberations Friday morning after being given 47 pages of jury instructions by the judge.

The plaintiffs are represented by a large team of powerful lawyers under the umbrella of the non-profit Integrity First for America.

Kaplan thanked the jurors for their time and patience, especially after seeing such traumatic videos over and over again, and said they should have no problem finding them liable “under the law, under the facts and under common sense,” Kaplan said.

Karen Dunn, another attorney for the plaintiffs, took over where Kaplan left off, addressing one of the defendants, Christopher Cantwell, saying he wanted jurors to believe he was brought to the rally because he’s a good speaker. Dunn said that’s not true.

“He was there because he had an enormous following of armed extremists.” Dunn said of Cantwell. “He could promote, facilitate and execute violence.”

She showed the jury how the organizers put out calls to get shields and bring other weapons, such as flagpoles and pepper spray, which they referred to as “gas.”

Dunn showed messages from other White supremacists who support the idea that demonstrators in the street should be run over. “This is reasonable foreseeability,” Dunn said, adding that all the members are liable for this.

“The evidence in this case is crystal clear that this plan went as intended,” said Dunn, showing a video of high-profile defendant Richard Spencer declaring victory at the statue.

Dunn told the jurors, “All we need to show is a shared objective to cause racially motivated violence.”

She explained that many of the defendants claim they didn’t know what was going on or that they didn’t know each other, but “that doesn’t matter, they’re still part of the conspiracy,” Dunn said.

“This is about the use of force. This was about occupying space and that was the plan for the Battle of Charlottesville,” Dunn said.

She added, “These defendants believed that they were entitled to run them down.”

And at the heart of the civil case is the conspiracy claim against the defendants.

James Kolenich, attorney for Jason Kessler and two other defendants, told the jury, “Hearing all this testimony or hearing all this from the plaintiffs, I want you to say, ‘So what.’”

Spencer, who is defending himself, said he was not part of a conspiracy because he never participated in chats on an app used by other defendants.

Then, in a tense moment between Spencer and the judge, Spencer recalled then-President Donald Trump’s infamous statement about the rally: “There were good people on both sides.” But Moon told him that quote was never entered into evidence.

“We can’t go back to law school here. You have to follow the rules,” Moon said.

Spencer said he agreed with the sentiment, ignoring the judge’s orders.

“There were some bad people on both sides,” Spencer said, referring to antifa.

The almost three-week trial featured attorneys for victims of the violence putting together puzzle pieces for jurors and arguing that the defendants acted as an interconnected web, meant to goad counterprotesters into violent battles.

The defense notably displayed less cohesion than the plaintiffs, oftentimes shifting the blame for the violence, arguing they didn’t like each other, taking snipes at one another and alleging they barely knew each other.

They have said they did not initiate the deadly violence that ensued and argued they were exercising their First Amendment right to protest. They also say there was no conspiracy and the violence stemmed from law enforcement’s failure to keep the opposing groups separated.

The 2017 rally turned the city into another battleground in America’s culture wars and highlighted growing polarization. It was also an event that empowered White supremacists and nationalists to demonstrate their beliefs in public, rather than just in online chat rooms.