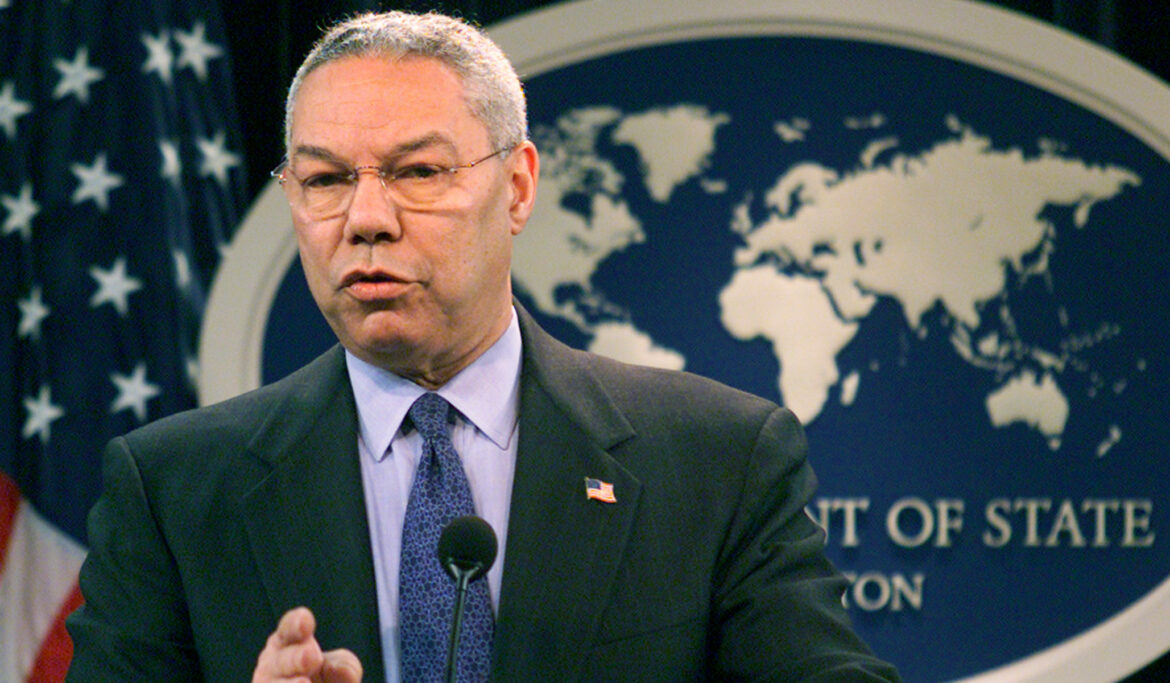 Then-Secretary of State Colin Powell speaks at the State Department in
Washington, D.C., in 2003. (Brendan McDermid/Reuters)

Born in Harlem to Jamaican immigrants, he graduated from City College, where he participated in ROTC, then served two tours in Vietnam, before ascending the ladder to eventually occupy top positions in the U.S. government.

Powell, the first African-American chairman of the Joint Chiefs and secretary of State, was a widely admired symbol of the American Dream, and rightly so.

A very capable man, he was also a conventional thinker whose perennial denunciations of the Republican Party had become toothless and predictable even before Donald Trump showed up on the scene. Over the years, we had substantial differences with him on politics and policy.

Powell came to prominence as Ronald Reagan’s national-security adviser, a role Reagan had difficulty filling throughout his tenure. Powell did the job well, and then George H. W. Bush made him his chairman of the Joint Chiefs. At the height of his powers, Powell brilliantly managed the first Persian Gulf War, becoming famous for his clear, pungent briefings.

The war was the first real test of the post-Vietnam U.S. military, and it passed with flying colors. Yet Powell and his civilian bosses were too eager to end the war on a rapid timetable with a memorably round number — 100 hours — and left a festering problem in Iraq that would, with time, swallow the presidency of George H. W. Bush’s son and dent Powell’s own reputation.

In the aftermath of the Gulf War, Powell was a national hero, and his decision not to run for the Republican nomination in 1996 is, as everyone says, one of the great “What if’s?” of recent American political history.

Powell became George W. Bush’s secretary of State and made an outsized contribution to the dysfunction at the top of the administration’s national-security apparatus. He was a classic case of a secretary of State getting captured by his own building and waged a constant war of leaks against his adversaries in the administration, especially at the Department of Defense.

Powell’s presentation on the evidence of Iraq’s WMD’s prior to the Iraq War became an enormous embarrassment. Yet the fault was more with the overall state of the intelligence — accepted across agencies of the U.S. government and by foreign spy organizations, as well — rather than Powell’s handling of it per se.

The famous Powell doctrine, setting out a series of tests before engaging in military conflict, can be too formulaic and constraining, but there’s no doubt that the Bush administration should have been more mindful of the good reasons for Colin Powell’s general hesitance about using military force before it launched the Iraq war.

Powell’s disaffection with his own Republican Party began in 2008, when he endorsed Barack Obama, and only grew over time. He was never a conservative, but a man of the center-right who moved left over time.

He won’t be remembered, though, for his positions on politics, but for a long, consequential career of service to a country that he loved and that benefited from his devotion. R.I.P.