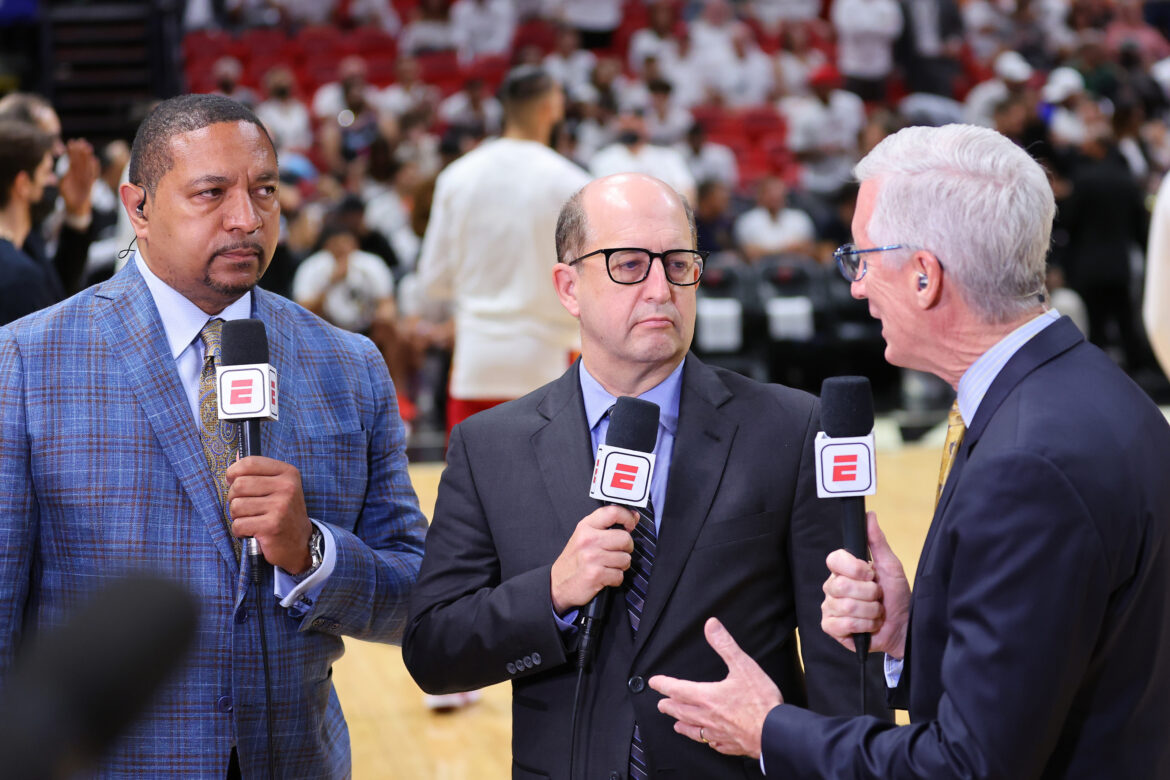 ESPN will be short-handed in the broadcast booth ahead of Game 1 of the 2022 NBA Finals between the Boston Celtics and the Golden State Warriors on Thursday night.

The New York Post reported on Thursday analyst Jeff Van Gundy and insider Adrian Wojnarowski have tested positive for COVID and will miss Game 1. Play-by-play guy Mike Breen was unable to call Game 7 of the Eastern Conference Finals between the Celtics and the Miami Heat due to him testing positive.

Andrew Marchand of The New York Post would later report Mark Jones will fill in for Breen again and would work alongside Mark Jackson, as Breen did not clear COVID protocols in time for Game 1 on Thursday night.

NEWS: Mark Jones will be on play-by-play for tonight's Game 1 of the NBA Finals, according to an ESPN spokesman. He will team with Mark Jackson. https://t.co/ogklSLtH9Z

ESPN is hoping that Breen and Van Gundy clear COVID protocols in time to call Game 2 in San Francisco on Sunday evening.

As far as Wojnarowski is concerned, he works mostly on NBA Countdown. He could rejoin the ESPN crew in Game 3 in Boston, or may just work remotely for the time being.

The good news in all this is ESPN has plans in place to handle a COVID outbreak like this within their broadcasting team. Keep in mind this is the only playoff series left, not just for ESPN, but for everyone. The NBA Finals are going to go on, regardless of who is in the booth or on the sidelines. ESPN paid out the wazoo for the broadcasting rights of the NBA Finals. It may have a great series.

Although the Warriors have won the Western Conference Finals six of the last eight years, they had missed out on the playoffs entirely in the two previous postseasons. While Boston has been a fixture in the postseason out east, the Celtics had not won their conference since 2010 prior to this spring. These franchises may have a plenty of titles, but this is still a very intriguing matchup.

Another championship for the Warriors would give them four in the Steve Kerr era. It would only further solidify his place in Springfield, alongside his big three of Steph Curry, Draymond Green and Klay Thompson. As for Boston, this would be the 18th in franchise history. A championship would be a game-changer for Jayson Tatum. He has the most to gain by winning the 2022 NBA Finals.

Here is a speedy recovery for Breen, Van Gundy and Wojnarowski, as well as anyone with ESPN.