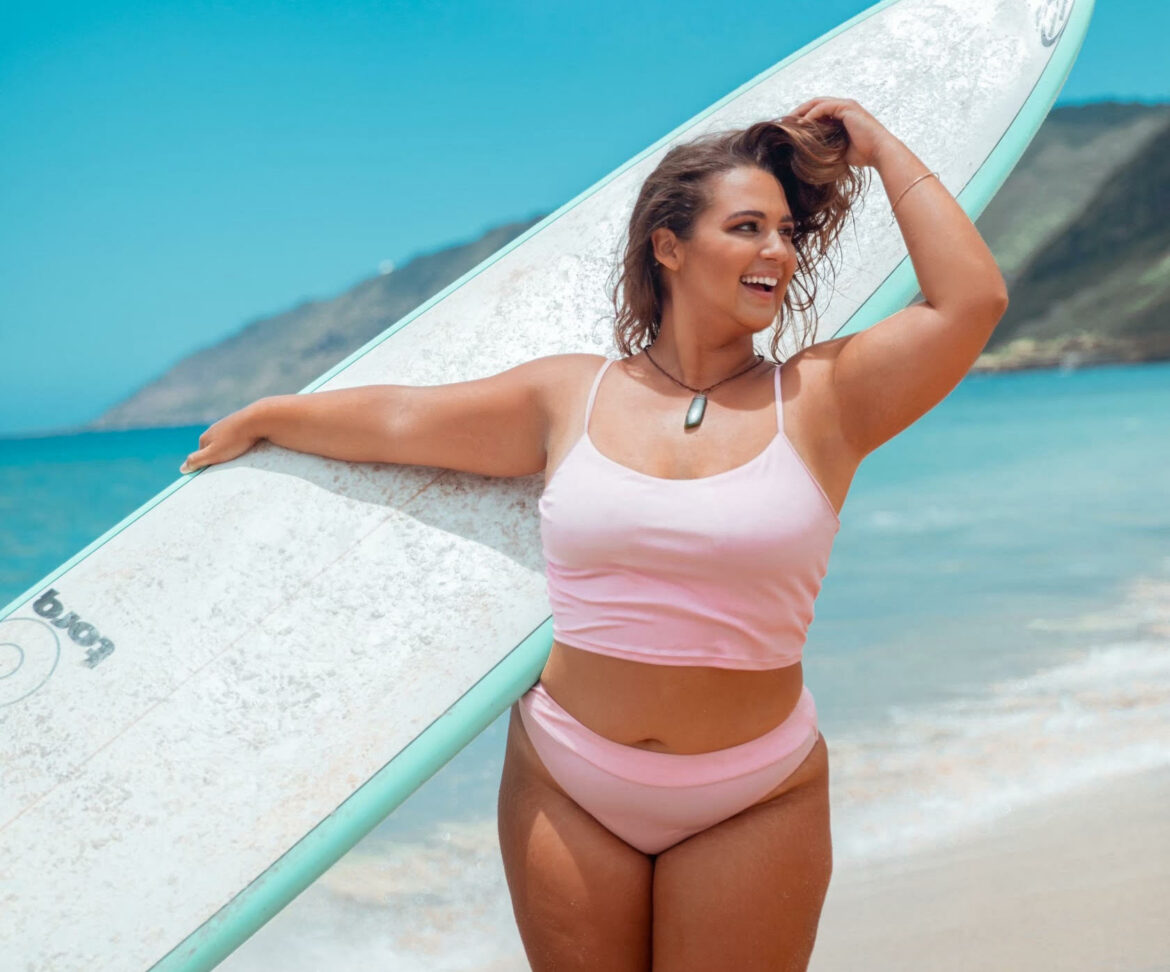 “The ocean is the place where I find the most joy,” explains Elizabeth Sneed, best known as the leader of the Curvy Surfer Girl movement. “In my heart, I knew I wanted to learn to surf to be closer to the ocean.” That’s why in 2017 at age 26, she packed up her life and left land-locked Arizona to move to the Aloha state.

There’s something truly magical about Hawaii. Its year-round tropical climate, breathtaking scenery and aloha welcome attract over eight million tourists per year. The islands are also considered to be the birthplace of modern-day surfing, with a vibrant history of wave-riding that’s as embedded into its culture as the native Hawaiian language.

The surf conditions are unbeatable too. Elizabeth Sneed is no different and quickly adjusted to living in paradise. But as she began taking surf lessons, she faced a challenge that she hadn’t initially anticipated.

“I started surfing when I was at my heaviest, at over 210 pounds at five feet tall,” explains Sneed. “My weight and body image took a pretty big toll on me when I first started surfing.”

Sneed turned to surf media for inspiration but only found young, slim, able-bodied and pro-level surfers. She quickly noted the lack of diversity in surf media’s representation of surfers, and couldn’t find a role model to look up to.

“Although most surf breaks have both men and women of all ages, skills and surfing abilities — most of the time, people are beginners or intermediates.

But you don’t see any representation of that in surf media,” says Sneed. Especially if they are older, have a different body type or have had children. I started to think that because of my size, I didn’t have a place in surf culture.”

Lack of representation in surf media might have initially deterred Elizabeth Sneed, but body size doesn’t determine surfing ability. There are surfers with curvier bodies who have gone down in history as some of the best of all time.

He placed ahead of Jeremy Flores and Josh Kerr, and was signed by Rip Curl. He’s since gone on to coach the Rip Curl grom team. These surfers all made an impact on the surfing community without conforming to the typical surfing body type.

Representation in surfing is important for two reasons: perception and inclusivity. As a sport that has historically seemed exclusive for myriad reasons, representation in surf media helps people from marginalized communities feel included and welcomed into the sport. It also allows people to reinforce positive perceptions of themselves and what they could potentially achieve. Sneed’s surfing instructor understood this and encouraged her to keep going.

Sneed quickly learned that there were limited surf wear options readily available for plus-sized women. Most major brands offered very few options above a size large, forcing plus-sized women to order custom-made or men’s suits to be able to get in the water.

It perpetuates this patriarchal misogyny that women over a size 14 shouldn’t have size options.

With the support of her instructor, Elizabeth Sneed overcame both barriers to entry, continued her surfing journey, and often frequents her favorite Hawaiian break, Pops, which is the outer reef behind Canoes to the west of Waikiki. “I love going out there on a 2-4 foot day with these beautiful, long rolling waves,” says Sneed. “It’s like a 20-minute paddle to get to, but so worth it.

The waves roll in, build momentum and have this slow ride down that just goes and goes. It’s out in the middle of the ocean, and the waves are just, they are pure magic.”

For three years, Elizabeth Sneed continued to build her surfing skills at longboarding breaks around Oahu.

“I’m most proud of having the courage to start Curvy Surfer Girl because I was absolutely terrified of becoming the face of this movement,” admits Sneed. “But I don’t want other women to feel as excluded as I did when I started surfing. Having surfwear that fits is an integral part of the starting process, and one negative experience can put you off surfing forever. If it wasn’t for my instructor, I probably would have given up, too.”

Since starting Curvy Surfer Girl, Sneed’s community has grown into the thousands.

In February 2021, Sneed partnered with Rip Curl for a campaign that was a world-first in incorporating plus-sized surfers. Sneed has also partnered with other surfwear brands to expand further the availability of plus-sized options.

“We’re now seeing major corporate surfing brands starting to move in the direction of body positivity,” adds Sneed. “These are conversations that were not even on the table before the Curvy Surfer Girl movement. So that’s a huge accomplishment that all of the women in our community have been able to leverage our voice to show how important it is.”

“If surf brands expand their collections to allow any body size to surf, then we’re removing barriers of entry, so more people can join in,” explains Sneed. “This can only be a good thing because it means more profit for surf brands.”

This month, Sneed has collaborated with swim and surfwear brand Jolyn for their first surfwear collection, which is aimed at supporting surfers of any ability level and size, by using sea-flex fabric, UPF 50+ protection and having a non-slip fit.

“Jolyn was the first surf wear purchase that I made that made me feel like I fit in,” says Sneed. “They catered to my size, were stylish and supportive. It was revolutionary. So partnering with Jolyn has helped me bring the same feeling to more women.

Her next goal? Wetsuits

“I’m mobilizing our community of almost 100,000 women to continue to put pressure on surf brands and leverage our voice and influence to make these changes happen. So that’s what I’m going to continue doing, so we can make surfing more accessible for more women.”