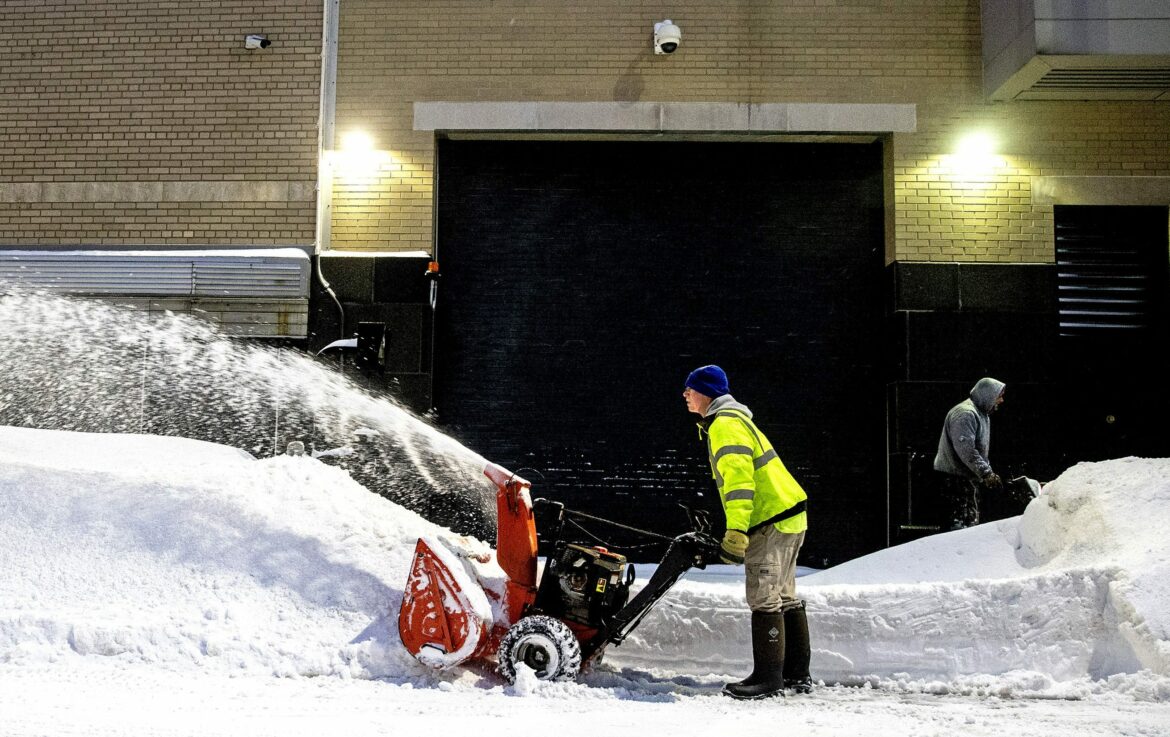 More than 300,000 customers were without power in a large swath from Texas to New York on Friday. Frigid temperatures are also expected for much of this weekend, with the coldest day being Saturday. A tornado in Alabama sparked by the winter storm killed at least one person.

A major winter storm that has already wreaked havoc across the United States with snow and ice was set to make its final push through the Northeast on Friday, bringing more dangerous conditions and cold weather.

“Heavy snow and treacherous ice accumulations” are expected around the Northeast, the National Weather Service said, after the storm left more than a foot of snow in many areas in the Midwest on Wednesday and Thursday. From New England to west of Tennessee, ice accumulation stretched more than 1,000 miles, downing power lines and making roads slippery.

More than 300,000 customers were without power in a large swath from Texas to New York as of Friday afternoon, according to online tracker Poweroutage.us, and more than 3,600 flights in the U.S. were already canceled Friday after thousands were canceled earlier this week, according to Flightaware.com.

Flights were disrupted at major hubs in the U.S. on Friday, including airports in New York City, Boston and Dallas.

In Oklahoma, police were investigating the hit-and-run death of a 12-year-old boy who was sledding when he was hit by a vehicle.

The storm also spawned a deadly tornado in Alabama, where at least one person in Hale County was killed and three others injured.

Adam Douty, a senior meteorologist at AccuWeather, said the snow, ice and even the tornado aren’t out of the ordinary for this time of year. While there was a large amount of icing in Tennessee and Arkansas, 8 to 12 inches of snow for much of the Midwest isn’t uncommon, Douty said.

“It’s a good snow storm … but it’s nothing unusual,” he said.

After the storm dropped heavy snow around the region Thursday, several more inches of snow were expected Friday evening in New York, Vermont, New Hampshire and Maine, bringing totals up to 18 inches in some areas.

New York Gov. Kathy Hochul warned residents to stay home if possible to avoid ice-coated roadways and the threat of falling tree limbs in the Hudson Valley and Capital regions.

“We’re not out of the danger zone yet,” Hochul said. “The weather is wildly unpredictable.”

Meanwhile, an icy wintry mix could bring dangerous travel conditions to the mid-Atlantic and around the I-95 corridor from New York City to Boston, the Weather Service said.

The heavy snow prompted a slew of local snow emergency warnings and school closures around Kentucky, Ohio, Indiana and Tennessee.

Tennessee was the hardest hit state for power outages, with more than 139,000 customers without electricity Friday afternoon, including almost a quarter of Memphis and surrounding Shelby County.

“It is not going to be restored quickly,” said Gale Jones Carson, a spokeswoman for Memphis, Light, Gas and Water, at a news conference Thursday afternoon. “We’re hoping by Sunday that things will be better.”

More than 27,000 customers in Ohio were also without power and 17,000 in Kentucky, according to Poweroutage.us.

Ice and snow were still falling in Ohio, including in Cincinnati and Columbus.

SAFETY TIPS:How to stay warm in your car during extreme winter weather

Light snow is expected to continue to fall for an additional accumulation of 1 inch, according the National Weather Service in Wilmington, Ohio. Temperatures in the low to mid-20s were expected Friday with wind chills in the single-digits in the morning and evening.

Meanwhile, with the storm’s precipitation mostly complete in Indiana, cold temperatures were expected Friday through the weekend.

WHAT IS WIND CHILL? Understanding the wind chill index and how it’s calculated

The National Weather Service said “frigid temperatures” could also be expected in the Rockies and throughout the heartland on Friday.

In Dallas, the Weather Service issued a “hard freeze warning,” telling residents that unprotected pipes were at risk. Temperatures in the area were in the high 20s and low 30s, but wind chills between minus 5 and 5 degrees were expected overnight. Northwest Oklahoma could see wind chills as low as negative 15 degrees.

Texas Gov. Greg Abbott issued a disaster declaration for 17 counties on Thursday, describing the ice storm as “an imminent threat of severe property damage, injury, or loss of life.”