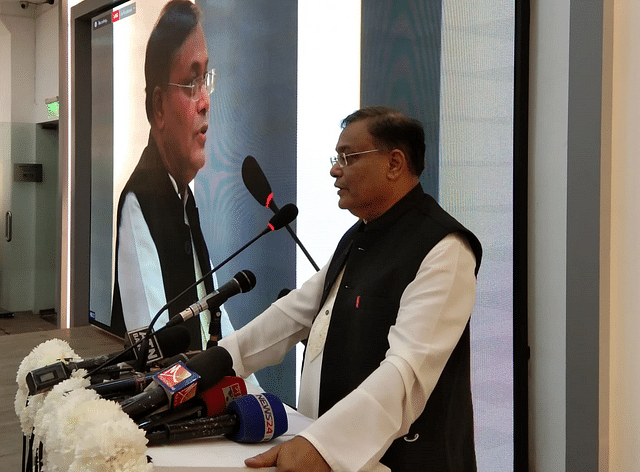 Hasan Mahmud, information minister and broadcasting minister and joint general secretary of the Awami League, said the country would have gone further if anti-national propaganda had not been carried out by foreigners.

The minister was speaking as the chief guest at the inauguration of Bangabandhu Corner and Directors Lounge and release of Covid Awareness Video Music at Icon Bhaban of Bangladesh Federation of Industries and Merchants Association (FBCCI) in Motijheel on Saturday.

Hassan Mahmood said, “It is sad but true that a former prime minister of the country has written an article in the Washington Times in his own name to stop the US from providing GSP to Bangladesh.” Not only that, the secretary general of a major political party in the country, who has been in power twice, signed a letter to the United States to re-evaluate aid to Bangladesh and use it as a weapon.

The Information Minister further said, ‘We will have politics in our country. Of course the government will be criticized. But propaganda against the country, propaganda to disrupt the country’s trade and commerce-export is never desirable. That is tantamount to treason.

Responding to a question from reporters about the President’s search committee for the formation of the Election Commission, the Awami League joint general secretary said, “According to the EC constitution, the search committee has two members of the civil society, including constitutional office bearers and a woman.” Everyone will admit that they have played a role in the past as highly respected and neutral people.

The Information Minister said, ‘I think there has been a nice search committee. A beautiful national election will be held in Bangladesh by the Election Commission formed through them, as has been done in Narayanganj City Corporation.

The Jatiya Party general secretary said this at a shadow parliament meeting on the Election Commission Act to increase the acceptability of the election system at the FDC in the capital on Saturday. Hosted by Debate for Democracy.

Speaking on the occasion, Mujibul Haque said that according to the rules, the executive branch is bound to listen to the orders of the Election Commission during the election. But there are no proper instructions on what will happen if the order is not obeyed. He said that at present the contradictory position of Awami League-BNP is not possible to be resolved by not only the Jatiya Party but also the Secretary General of the United Nations and even the President of the United States. For this reason, he suggested that an acceptable formula be worked out through talks with the political parties represented in the parliament to form an election-time government.

The Secretary-General of Japan said that being elected without a vote is contrary to democratic culture and participatory elections. Although Ershad was called dictator, the next BNP-Awami League government has become more authoritarian than Ershad.