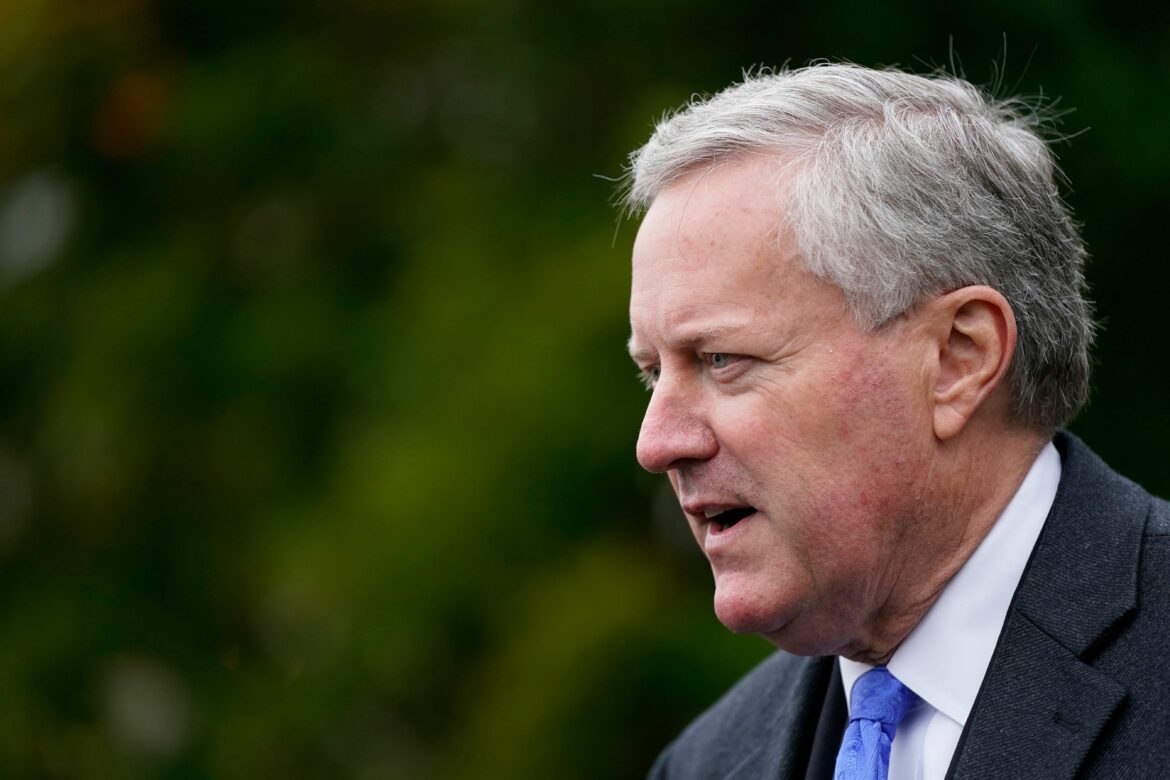 WASHINGTON (AP) — The House panel investigating the Jan. 6 Capitol insurrection is set to recommend contempt charges against former White House chief of staff Mark Meadows on Monday as lawmakers are releasing new details about thousands of emails and texts he has handed over to the committee.

In laying out the case for the contempt vote, the nine-member panel released a 51-page report Sunday evening that details its questions about the documents he has already provided — including 6,600 pages of records taken from personal email accounts and about 2,000 text messages.

The panel did not release the documents but described some of them. The report gives details about Meadows efforts’ to help Donald Trump overturn his defeat in the presidential election, communications with members of Congress and organizers of a rally held the morning of the insurrection and frantic messages among aides and others as the violent attack unfolded that day.

The panel says it also wants to know more about whether Trump was engaged in discussions regarding the response of the National Guard, which was delayed for hours as the violence escalated and the rioters brutally beat police guarding the Capitol building.

The report says that the documents provided by Meadows show that he sent an email to an unidentified person saying that the guard would be present to “protect pro Trump people” and that more would be available on standby. The committee does not give any additional details about the email.

The committee says in the report that Trump’s former top White House aide “is uniquely situated to provide key information, having straddled an official role in the White House and unofficial role related to Mr. Trump’s reelection campaign.”

The contempt vote comes after more than two months of negotiations with Meadows and his lawyer and as the panel has also struggled to obtain information from some of Trump’s other top aides, such as his longtime ally Steve Bannon. The House voted to recommend charges against Bannon in October, and the Justice Department indicted him on two counts of contempt last month.

The panel is aiming to develop the most comprehensive record yet of the violent attack, in which hundreds of Trump’s supporters violently pushed past the law enforcement officers, broke into the Capitol and interrupted the certification of Biden’s victory. Meadows’ testimony could be key, as he was Trump’s top aide at the time and was with him in the White House as the rioters breached the building.

The committee’s chairman, Democratic Rep. Bennie Thompson of Mississippi, scheduled the vote last week after Meadows failed to show up at his deposition. In a transcript of that meeting released on Sunday, a member of the panel’s investigative staff details several of the questions they would have asked. Many of the questions center on Trump’s efforts to overturn the election in the weeks before the insurrection, including Meadows’ outreach to states and his communications with members of Congress.

Committee staff said they would have interviewed Meadows about emails “to leadership at the Department of Justice on December 29th and 30th, 2020, and January 1st, 2021, encouraging investigations of suspected voter fraud,” even though election officials and courts across the country had refuted the claims.

The panel said Meadows, a former Republican congressman from North Carolina, also provided text messages sent to and from members of Congress “before, during, and after the attack on the United States Capitol. One exchange with a lawmaker concerned efforts to contact state legislators about the election because “POTUS wants to chat with them.” POTUS stands for president of the United States.

In a text exchange with an unidentified senator, the committee said, Meadows said that Trump believed that Vice President Mike Pence had power to reject electors in his role presiding over the certification. Pence did not have that power under the law, as the vice president’s function is largely ceremonial.

In other texts, sent the day of the attack, Meadows’ former colleagues encouraged him to get Trump to discourage the violence, the committee said. Similarly, in an exchange with an organizer of the rally that morning — where Trump told his supporters to “fight like hell” — the organizer told Meadows that they “desperately” needed direction from him because things “have gotten crazy.”

Meadows, who has balked at the committee’s questions, citing Trump’s claims of executive privilege, has sued the panel, asking the court to invalidate two subpoenas that he says are “overly broad and unduly burdensome.” The lawsuit accuses the committee of overreaching by issuing a subpoena to Verizon for his cell phone records.

Thompson and the committee’s Republican vice chairwoman, Wyoming Rep. Liz Cheney, said the lawsuit “won’t succeed at slowing down the Select Committee’s investigation or stopping us from getting the information we’re seeking.”

The panel has already interviewed almost 300 witnesses and lawmakers say they plan a series of hearings early next year to make many of their findings public.

The panel’s expected vote to recommend charges of contempt of Congress would send the matter to the full House, which is likely to approve the measure and expose Meadows to criminal prosecution by the Justice Department.