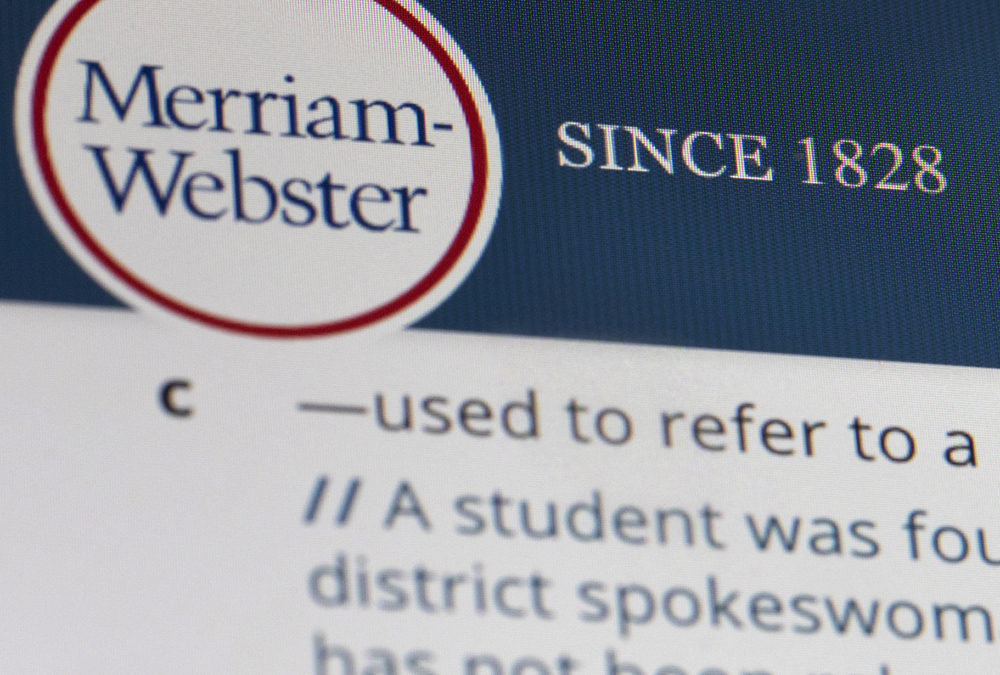 With an expanded definition to reflect the times, Merriam-Webster has declared an omnipresent truth as its 2021 word of the year: vaccine.

“This was a word that was extremely high in our data every single day in 2021,” Peter Sokolowski, Merriam-Webster’s editor-at-large, told The Associated Press ahead of Monday’s announcement.

“It really represents two different stories. One is the science story, which is this remarkable speed with which the vaccines were developed. But there’s also the debates regarding policy, politics and political affiliation. It’s one word that carries these two huge stories,” he said.

The selection follows “vax” as word of the year from the folks who publish the Oxford English Dictionary. And it comes after Merriam-Webster chose “pandemic” as tops in lookups last year on its online site.

“The pandemic was the gun going off and now we have the aftereffects,” Sokolowski said.

At Merriam-Webster, lookups for “vaccine” increased 601% over 2020, when the first U.S. shot was administered in New York in December after quick development, and months of speculation and discussion over efficacy. The world’s first jab occurred earlier that month in the UK.

Compared to 2019, when there was little urgency or chatter about vaccines, Merriam-Webster logged an increase of 1,048% in lookups this year. Debates over inequitable distribution, vaccine mandates and boosters kept interest high, Sokolowski said. So did vaccine hesitancy and friction over vaccine passports.

The word “vaccine” wasn’t birthed in a day, or due to a single pandemic. The first known use stretches back to 1882 but references pop up earlier related to fluid from cowpox pustules used in inoculations, Sokolowski said. It was borrowed from the New Latin “vaccina,” which goes back to Latin’s feminine “vaccinus,” meaning “of or from a cow.” The Latin for cow is “vacca,” a word that might be akin to the Sanskrit “vasa,” according to Merriam-Webster.

Inoculation, on the other hand, dates to 1714, in one sense referring to the act of injecting an “inoculum.”

Earlier this year, Merriam-Webster added to its online entry for “vaccine” to cover all the talk of mRNA vaccines, or messenger vaccines such as those for COVID-19 developed by Pfizer-BioNTech and Moderna.

While other dictionary companies choose words of the year by committee, Merriam-Webster bases its selection on lookup data, paying close attention to spikes and, more recently, year-over-year increases in searches after weeding out evergreens. The company has been declaring a word of the year since 2008. Among its runners-up in the word biography of 2021:

INSURRECTION: Interest was driven by the deadly Jan. 6 siege on the U.S. Capitol. Arrests continue, as do congressional hearings over the attack by supporters of President Donald Trump. Some of Trump’s allies have resisted subpoenas, including Steve Bannon. 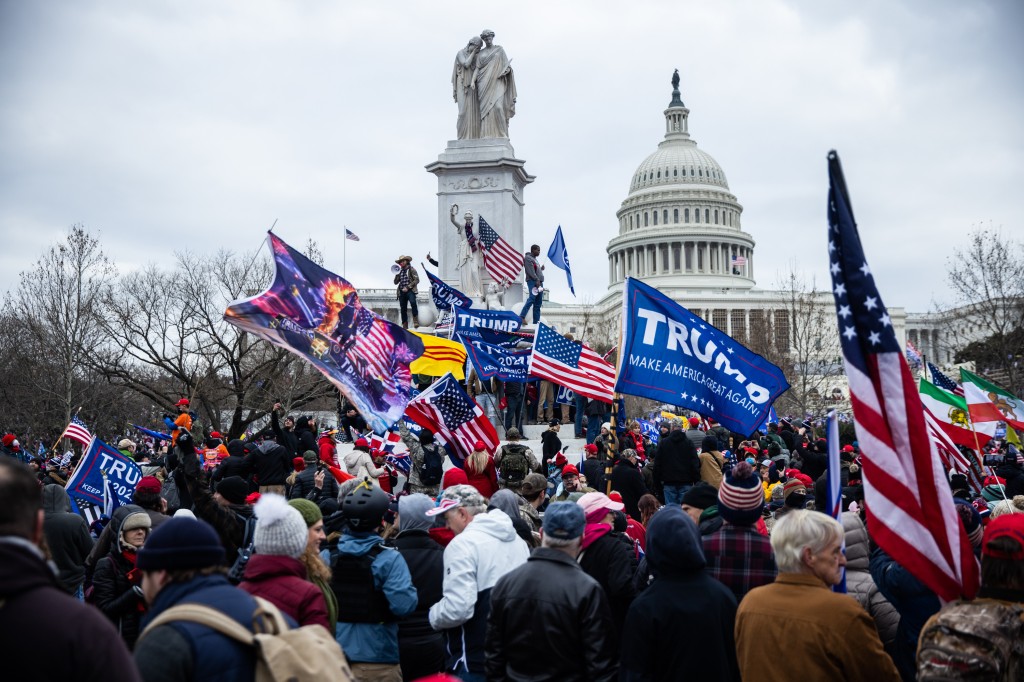 Insurrection was a runner-up for word of the year, following the events of the Capitol riot on January 6, 2021.Stephen Yang

INFRASTRUCTURE: President Joe Biden was able to deliver what Trump often spoke of but never achieved: A bipartisan infrastructure bill signed into law. When Biden proposed help with broadband access, eldercare and preschool, conversation changed from not only roads and bridges but “figurative infrastructure,” Sokolowski said.

“Many people asked, what is infrastructure if it’s not made out of steel or concrete? Infrastructure, in Latin, means underneath the structure,” he said.

PERSEVERANCE: It’s the name of NASA’s latest Mars rover. It landed Feb. 18, 2021. “Perseverance is the most sophisticated rover NASA has ever sent to the Red Planet, with a name that embodies NASA’s passion, and our nation’s capability, to take on and overcome challenges,” the space agency said.

The name was thought up by Alexander Mather, a 14-year-old seventh-grader at Lake Braddock Secondary School in Burke, Virginia. He participated in an essay contest organized by NASA. He was one of 28,000 K-12 students to submit entries. 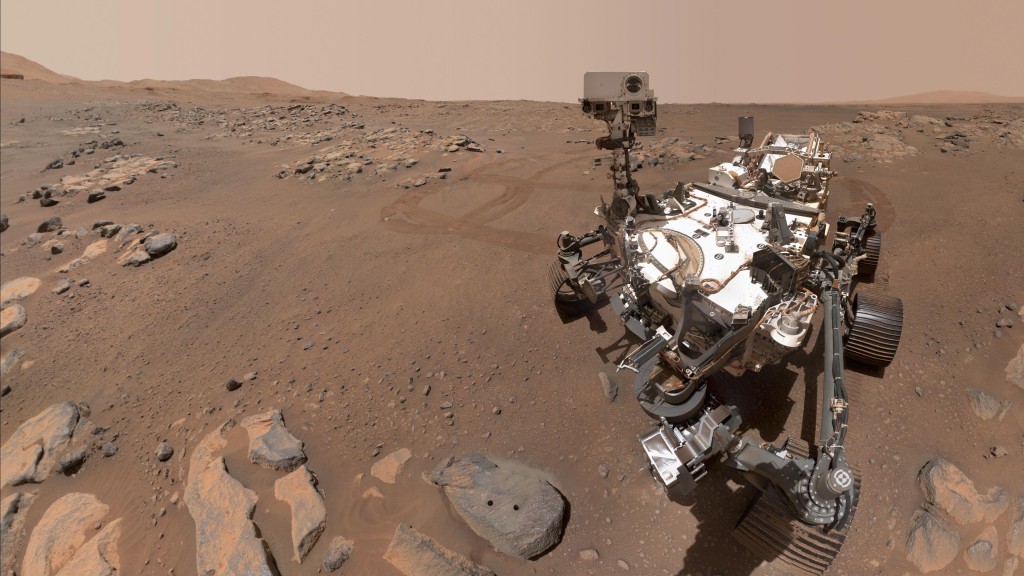 NASA’s Perseverance Mars rover taking a selfie over a rock nicknamed ‘Rochette.’ Perseverance was another runner-up for word of the year.EPA

NOMAD: The word had its moment with the 2020 release of the film “Nomadland.” It went on to win three Oscars in April 2021, including best picture, director (Chloé Zhao) and actress (Frances McDormand). Zhao became the first woman of color to win best director.

The AP’s film writer Jake Coyle called the indie success “a plain-spoken meditation on solitude, grief and grit. He wrote that it “struck a chord in a pandemic-ravaged year. It made for an unlikely Oscar champ: A film about people who gravitate to the margins took center stage.”

Other words in Merriam-Webster’s Top 10: Cicada (we had an invasion), guardian (the Cleveland Indians became the Cleveland Guardians), meta (the lofty new name of Facebook’s parent company), cisgender (a gender identity that corresponds to one’s sex assigned at birth), woke (charged with politics and political correctness) and murraya (a tropical tree and the word that won the 2021 Scripps National Spelling Bee for 14-year-old Zaila Avant-garde).