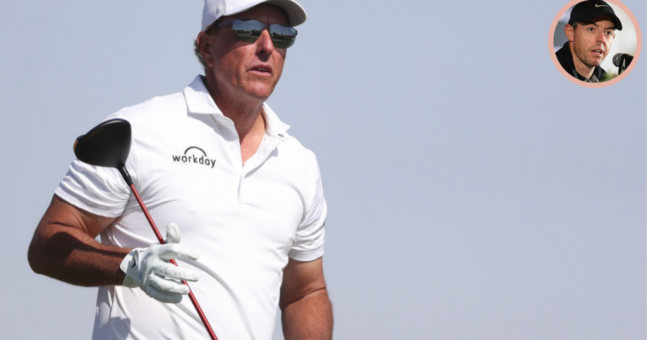 The World No 5 called the American naïve, selfish, egotistical’ and ‘ignorant’ for his comments last week.

Last week comments from Mickelson came out about being willing to overlook Saudi Arabia’s human right violations and would join the new proposed format to gain leverage over the PGA Tour.

Mickelson sat down with golf writer and author Alan Shipnuck, for his book titled ‘ Phil: The Rip-Roaring (and Unauthorized!) Biography of Golf’s Most Colorful Superstar’ back in November and said:

‘They’re scary motherf****** to get involved with,’ Mickelson said

‘They killed [Washington Post reporter and U.S. resident Jamal] Khashoggi and have a horrible record on human rights. They execute people over there for being gay. Knowing all of this, why would I even consider it?

Fans and fellow players blasted the 51 year-old for his stance. One of those players was Mcllroy, who was speaking after the final round of the Genesis Invitational.

The Irishman thinks that Mickelson will rethink his position after the backlash,

‘It was just very surprising and disappointing. Sad. I’m sure he’s sitting at home sort of rethinking his position and where he goes from here.’

“I mean, there’s no one. It’s dead in the water in my opinion. I just can’t find any reason why anyone would go.”

Some of the world’s best have pledged their allegiance to the PGA Tour, these include Bryson DeChambeau and Dustin Johnson, who both delivered a major snub to the SGL on Sunday

‘I was really glad to see DJ and Bryson put out those statements this week,’ said McIlroy.