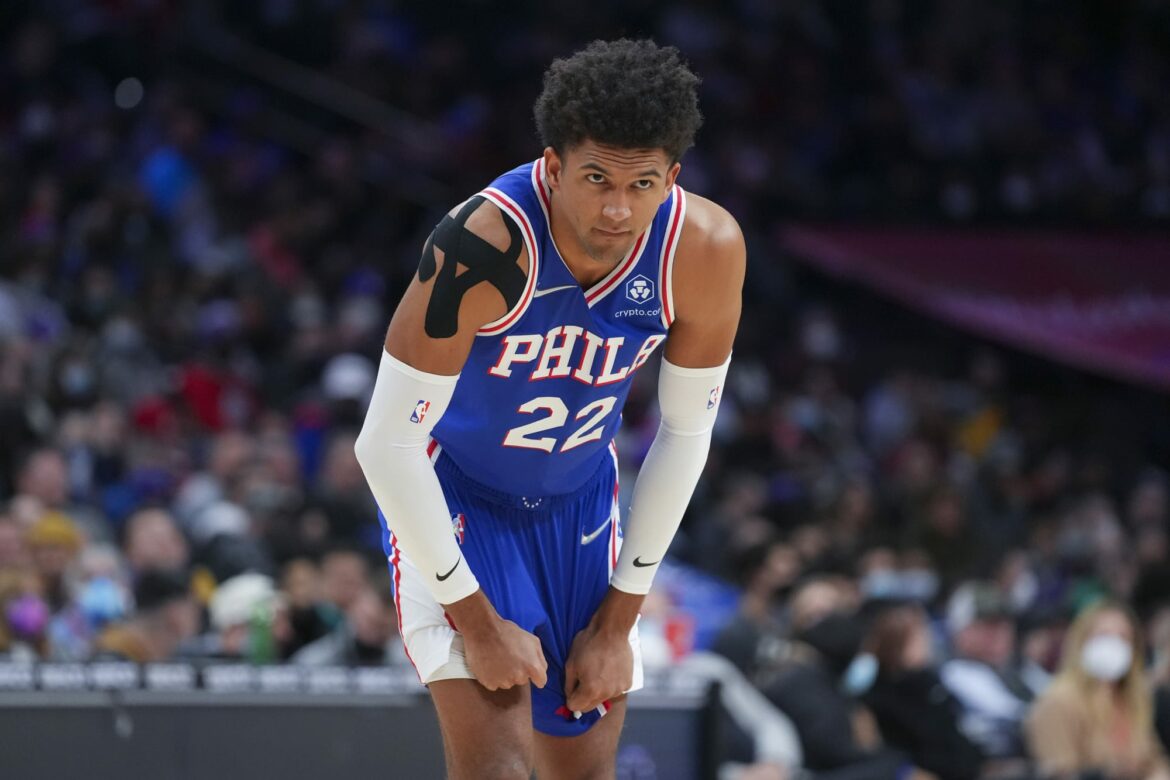 The Whiteboard is The Step Back’s daily basketball newsletter, covering the NBA, WNBA and more. Subscribe here to get it delivered to you via email each morning.

He brings so much polish and precision at the defensive end, it can be easy to forget that Matisse Thybulle is only in his third season with the Philadelphia 76ers. He’s only played 168 games in his young career but he’s already recorded 25 games with two or more blocks and two or more steals — that’s more than Luol Deng, Victor Oladipo, Ruben Patterson, Matt Barnes or Gary Payton. Among defensive-minded wings, he is a uniquely prolific playmaker, creating steals and blocking shots at unheard of rates, especially when you consider the fact that he’s only averaged 21.3 minutes per game for his career.

No one generates blocks and steals like Matisse Thybulle

If we look at his blocks and steals per 36 minutes, compared to the top 500 players in minutes played over the past two decades, you can see just how far ahead of the rest of the field he is. 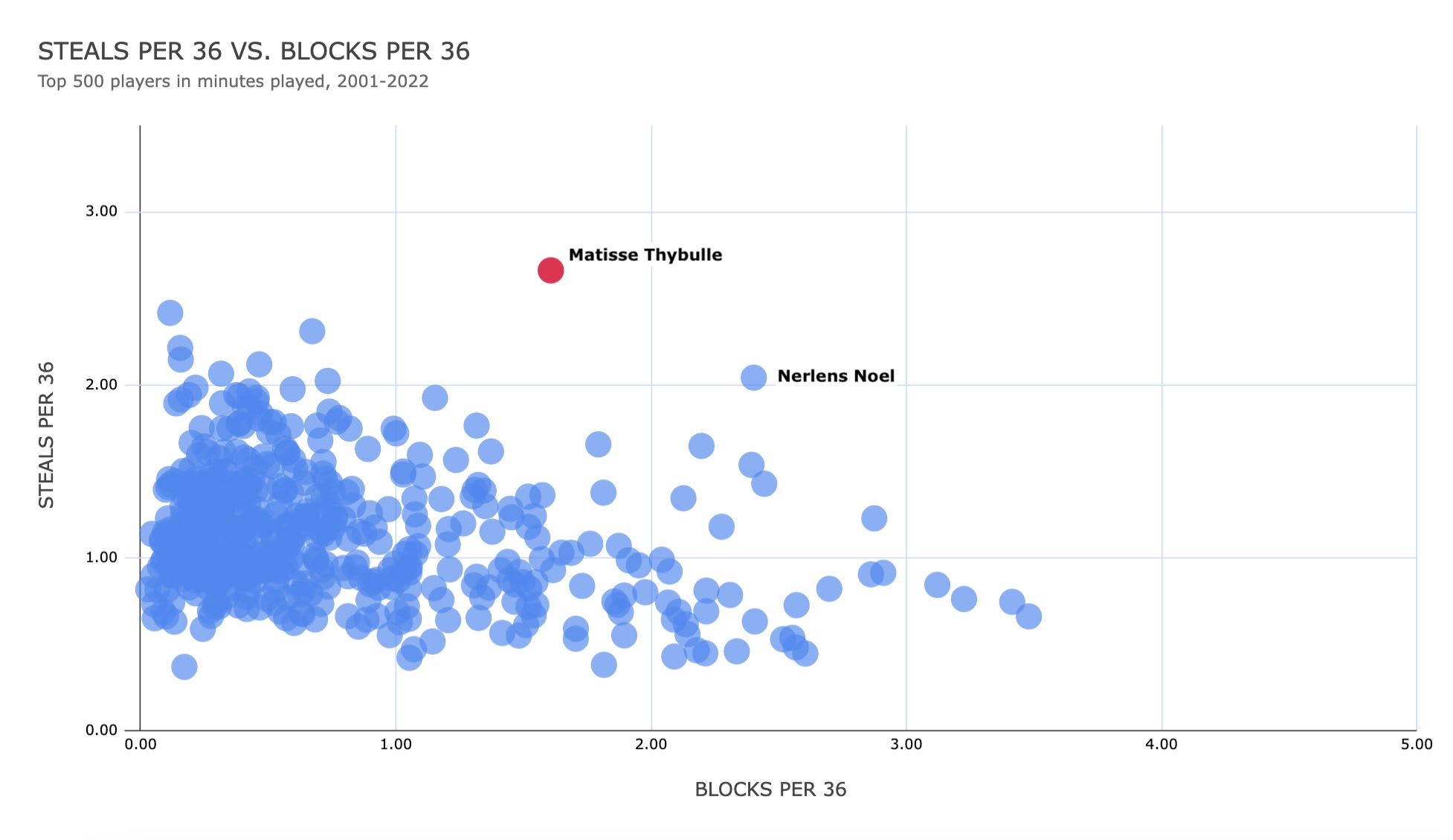 Nerlens Noel is the only other player who is even close to Thybulle but, as a big man, his defensive players are tilted more towards blocks and there is far less distance between him and some other bigs like Anthony Davis (2.44 blocks per 36, 1.43 steals per 36) and Stromile Swift (2.28 blocks per 36, 1.18 steals per 36) than there is between Thybulle and other wings.

The nature of defensive playmaking, creating blocks and steals, often comes from aggressive decisions and fouls can be the flip side of that coin. But in this regard, Thybulle is, again, an almost unbelievable outlier. The graph below shows the same group of players charted by their stocks (steals + blocks) per 36 minutes and their defensive fouls per 36 minutes. 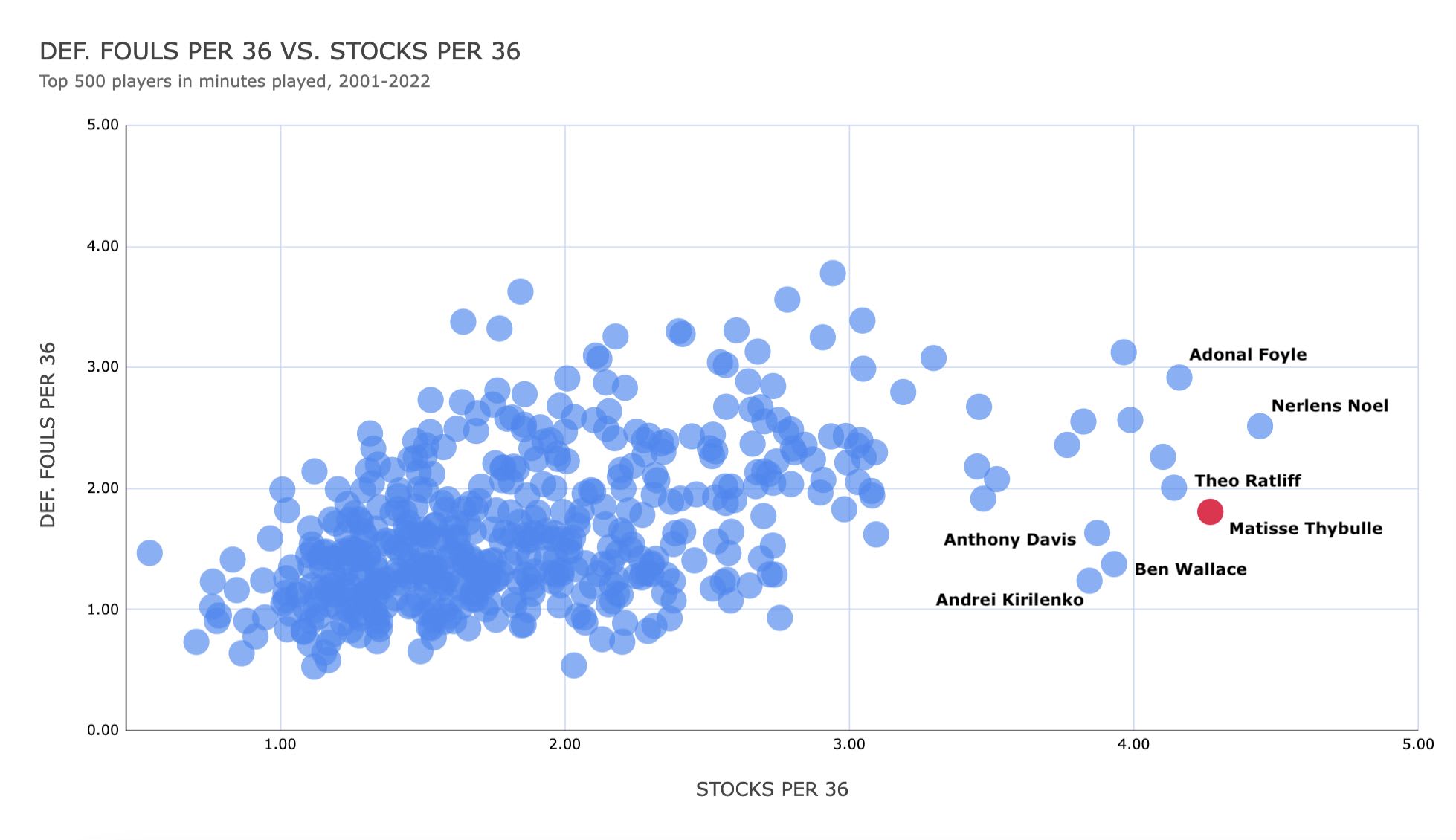 All of the players around Thybulle are bigs, or at least big wings, in the case of Kirilenko. But Thybulle has created more stocks per 36 minutes than anyone but Noel and he accomplished it far more while fouling far less than most of his peers.

By the ratio of stocks to personal fouls, Thybulle falls more in the middle of the pack, compared to the entire sample. But most of the players in that sample are taking far less risks than Thybulle and generating far fewer positive defensive plays. For example, LeBron generates for more stocks per personal foul (2.99) than Thybulle. But at 4.27 stocks per 36 minutes, Thybulle generates those positive plays nearly twice as often as LeBron (2.20).

As a part-time starter who averages under 30 minutes per game, Thybulle likely won’t be in contention for Defensive Player of the Year this season. But all-in-one defensive metrics that are pro-rated on a per-possession basis estimate him to be among the most impactful defenders in the league. If he ever expands his offensive game enough to become a full-time starter and increase his minutes he could definitely finish his career with a Defensive Player of the Year Award and an even more comfortably clear niche in the NBA record books.

Apparently, Cade Cunningham is a big fan of Duke big man Paolo Banchero (and he’s not the only one). Maybe, imagining those two together can be enough to carry Pistons’ fans through the rest of this messy season.

It’s sounding less and less likely that the 76ers are actually going to get James Harden. But you know Daryl Morey is planning something and Derrick White of the Spurs could make an interesting fit.

The Atlanta Hawks aren’t anywhere close to where they wanted to be this season and that could make them extremely interesting at the trade deadline, as buyers or sellers.

The Trail Blazers are having a fire sale. CJ McCollum is headed to the New Orleans Pelicans. Is Damian Lillard next out the door?