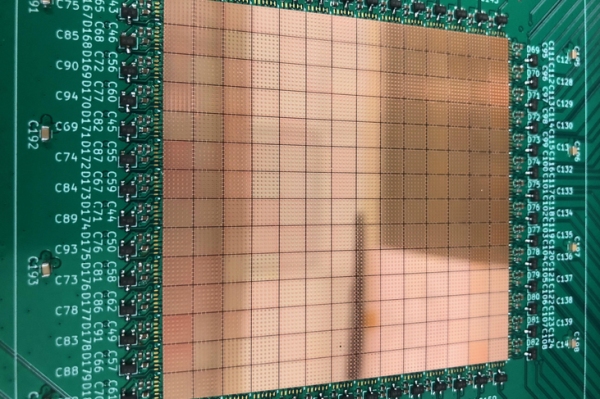 You may not be able to see ’em with your eyes, but in the space between infrared light and microwaves is an invisible stretch of the electromagnetic spectrum where neither electronics nor optical devices can manipulate energy. The cool thing about terahertz waves, though, is that they’re a lot like X-rays: You can use ’em to see through certain solid materials, but without the “oh dear, now I’m dead” side-effect of high doses of X-ray radiation. Researchers from the Terahertz Integrated Electronics Group at MIT, led by Associate Professor Ruonan Han, are trying to tap into this space. Fresh off the lab bench at MIT is an electronically steerable terahertz antenna array, which operates like a controllable mirror.

The upshot is that by using this deck-of-cards sized slice of technology, the researchers are nudging open the door. The tech may enable higher-speed communications and vision systems that can see through foggy or dusty environments.

The reflectarray packs nearly 10,000 antennas onto a small device that is able to precisely focus a beam of terahertz energy on a tiny area. It can control it precisely and quickly with no moving parts. The images the device generates are comparable to lidar devices, but is able to penetrate rain, fog and snow. The researchers claim that this is the first solution that could create military-grade resolution for commercial devices of this type.

“So, it stands as an alternative to those big radar dishes at the airport that move around with motors.

Unlike other terahertz arrays, which can take hours or even days to create an image, theirs works in real time. Traditionally, computing and communicating enough bits to control 10,000 antennas at once would dramatically slow the reflectarray’s performance.

The researchers avoided this by integrating the antenna array directly onto computer chips.

The upshot is that each individual antenna can store a library of different phases. The two-transistor phase shifter has an additional benefit; halving the power consumption of the solution, and eliminating the need for a separate power supply.