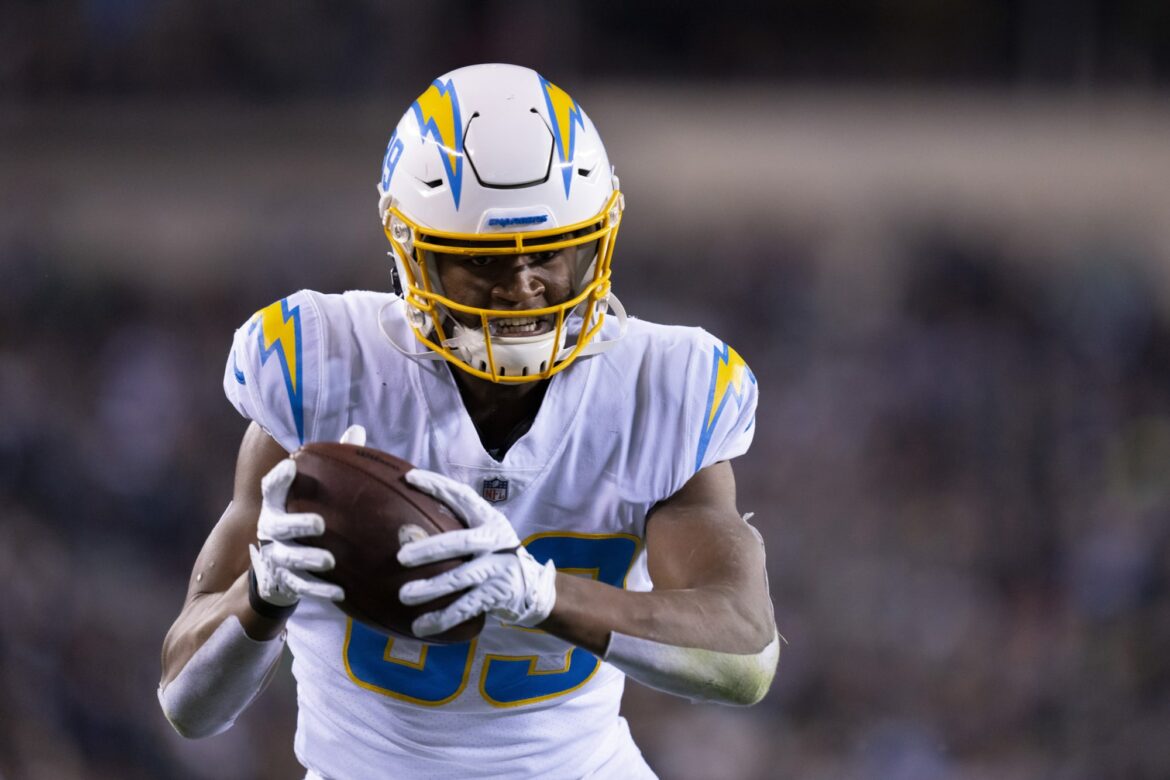 The Chargers lost to the Chiefs on Thursday night in overtime, a disappointment considering Los Angeles had several occasions to clinch the win with a field goal instead of attempting passes on fourth down.

On one such occasion, the Chargers could have avoided a dangerous injury that was difficult to watch on prime time.

In the first quarter, Justin Herbert targeted Donald Parham Jr. for a touchdown in the endzone. Parham Jr. caught the ball, but it bounced out of his hands before he could maintain possession and it could be considered a catch. The ball fell, and so did Parham Jr., his head slamming into the grass.

Cameras zoomed in as Parham Jr. seemed to express frustration over the drop, then his arms froze. Parham Jr. had his bent arms suspended in mid-air in front of him as he appeared unconscious. Medical personnel rushed to the field, eventually escorting him away.

On Friday, Ian Rapoport shared an uplifting update on the Chargers tight end, saying that Parham Jr. was diagnosed with a concussion but is now “comfortable and alert.”

The #Chargers say that TE Donald Parham Jr. stayed at UCLA Harbor Medical Center last night and was diagnosed with a concussion. He is comfortable and alert, likely to be discharged later today.

Parham Jr. will be sent home today, which is good news when it was unclear Thursday night just how serious Parham Jr.’s injury could be.

Donald Parham Jr. was discharged from hospital on Friday as “comfortable and alert”

At the time, no one could tell exactly what happened to Parham Jr. or how severe his injury was.

I’ve spoken to multiple brain injury experts and no one is confident in the diagnosis for Donald Parham Jr.’s shaking arms here based on this video. But it’s not good. The team at @ConcussionLF is hoping for the best possible outcome. pic.twitter.com/c3jTZ8DuPn

Joe Buck appeared to make light of Parham Jr.’s injury — which was clearly a result of some kind of physical trauma — by inferring that it could have possibly been from wind chill.

LISTEN: Donald Parham Jr. is at the hospital with a brain/spine injury. Joe Buck says he’d never speculate on an injury, then speculates DP’s arm tremors were bc “it’s cold tonight, at least by Los Angeles standards.”

The way Fox handled Donald Parham Jr’s injury was absolutely classless! To zoom in on a player who is knocked out cold and then talk about a seizure as if he was shaking from being cold. We all know Joe Buck is the worst but this is absolute nonsense!

While the NFL proclaims that they have improved safety standards to reduce brain trauma, the reality is that football players are still at significant risk for severe brain and spinal injuries. Concussions take a toll over time, which contributed to the deaths of former players like Junior Seau, Vincent Jackson, Phillip Adams and Aaron Hernandez. Ryan Shazier was nearly paralyzed from a hit in Dec. 2017, which made Parham Jr.’s on-field hit a frightening reminder of how dangerous the game can be.