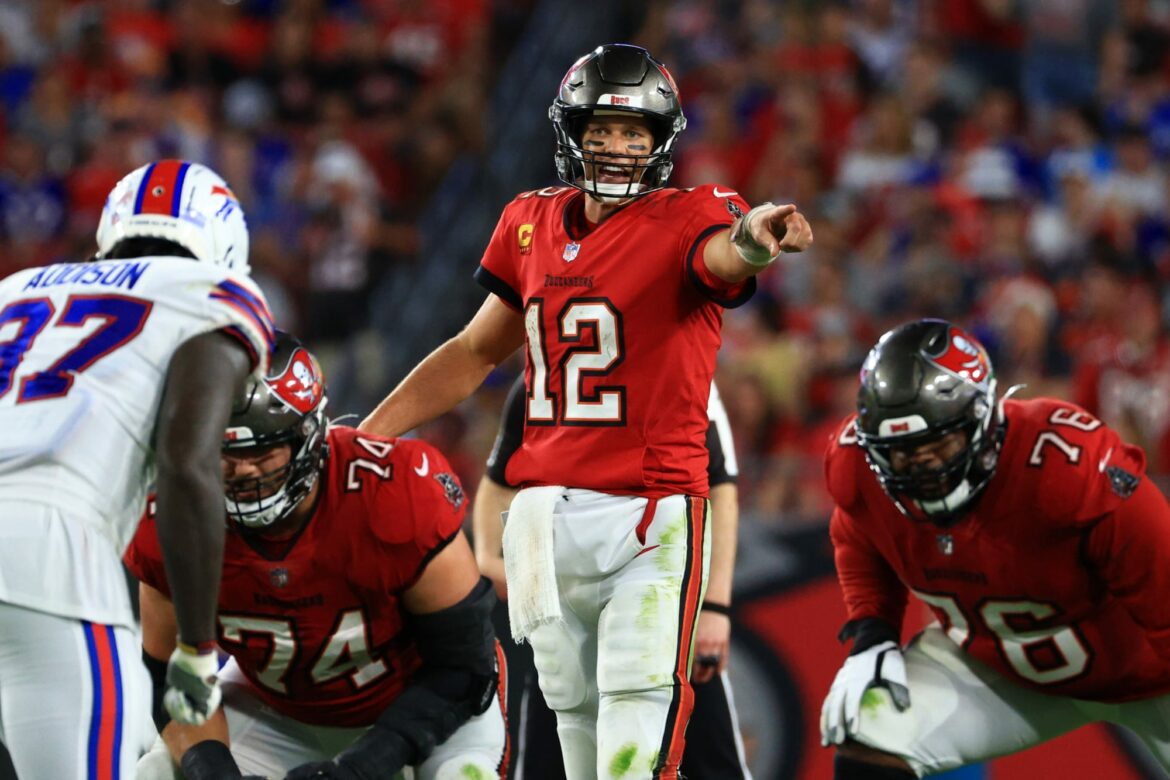 Despite coughing up a 21-point lead, Tom Brady and the Tampa Bay Buccaneers showed championship character, knocking off the desperate Buffalo Bills

Tom Brady and the Tampa Bay Buccaneers withstood a second half barrage from the Buffalo Bills, ultimately scoring a walk-off touchdown for the overtime win, in the process strengthening their case as the team to beat in the NFC.

Six days after the Bills were run over by the New England Patriots, who didn’t even pretend to try throwing the ball — Mac Jones attempted only three passes Monday night, Tampa Bay dominated at scrimmage on both sides of the football in a 33-27 overtime victory.

This was a desperate Buffalo Bills team, potentially staring down the barrel at their own postseason fate and that took their best shot at the champs. But came up short.

Clearly, Buccaneers head coach Bruce Arians and offensive coordinator Byron Leftwich studied every snap of Monday night’s game, as they unleashed a running-game onslaught on the previously No. 12 ranked rushing defense. Leonard Fournette finished with 113 yards (including a 47-yard touchdown scamper and another 21-yard run), as the Buccaneers racked up 137 total rushing yards.

Bowles’ multiple stunts and exotic blitz packages overwhelmed the Bills’ offensive line early, especially on a first quarter sack when safety Andrew Adams came screaming off the edge and linebacker Shaq Barrett pierced the middle of the Buffalo line on a delayed rush to drag Allen to the ground.

It was just that kind of day, or so we thought.

But, Buffalo came charging back, scoring 17 unanswered points and erasing a 21-point deficit, ultimately tying the game at 27 and forcing overtime.

While the Bills mounted a second-half challenge, with Allen hitting tight end Dawson Knox with 9:07 remaining, after previously rushing for a score with 7:34 remaining in the third quarter, and later hitting Gabriel Davis to pull within three points with under 5:00 remaining, Tom Brady and the Buccaneers did enough to survive.

The Buccaneers withstanding the storm is just one reason this team looks fully capable of mounting a legitimate Super Bowl defense.

Perhaps the biggest reason for optimism in Tampa Bay is that Brady is behind center, and playing some of his best football of the season against some of the most complete teams to date on the Buccaneers’ schedule.

Sunday against the Bills, Brady completed 31-of-46 passes for 363 yards and a pair of touchdowns, adding a quarterback sneak for a score, as well.

Brady’s biggest throw of all, almost effortlessly hitting Breshad Perriman on a crossing pattern that Perrimen took 58 yards to the house for the game-winning touchdown, in overtime. It was Brady’s 700th career touchdown and 52nd game-winning drive.

Over the past three games Brady has completed 71 percent of his passes for 901 yards with seven touchdowns to three interceptions, against the Giants, Colts, and always pesky NFC South rival Falcons leading into Sunday.

In addition to Brady’s recent dominance, and strong showing, the fact that the Buccaneers withstood Buffalo’s second-half counterpunch speaks volumes to the character of Arians’ team in the season’s final month.

Following Sunday’s win, the Buccaneers are 10-3 and will finish the weekend no worse than the NFC’s No. 3 seed — pending the outcomes of Cardinals-Rams and Packers-Bears.

The bad news for those other NFC contenders?

After knocking off the Bills, the Buccaneers won’t play a team the rest of the way with an above .500 record, finishing the season off against the Saints next week, and a game at the lowly Jets sandwiched between matchups against the Carolina Panthers.

Certainly a different road for the Buccaneers to travel home than qualifying as the NFC Wild Card and having to win three road games just to get home for the Super Bowl inside Raymond James Stadiums.

Thanks to a favorable finishing stretch, Brady peaking at the right time, and the experience of surviving games like Sunday’s win over the Bills tucked tucked in their back pocket, the Buccaneers are certainly a team to take seriously both in the race for home field advantage in the NFC and for a second Lombardi.