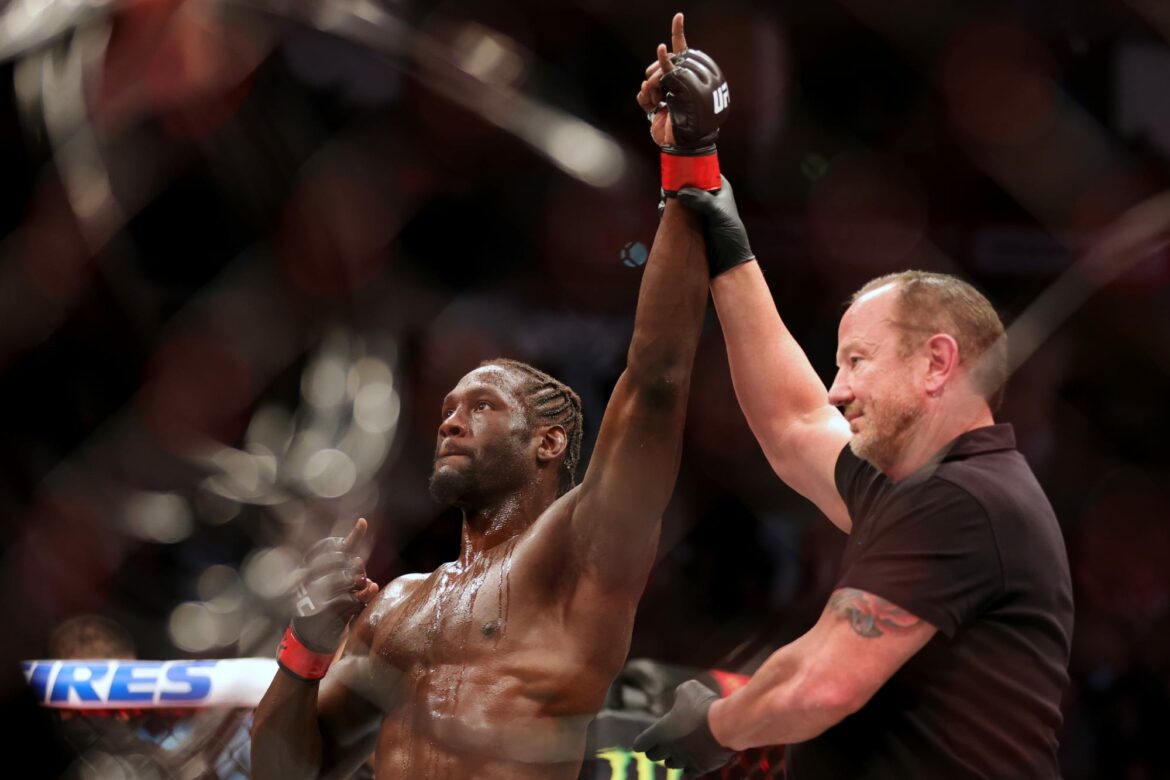 “Man if anybody knows my career at middleweight. That was how it was going to go… You come in with the disrespect, you come into my face, I’m going to punch you in yours… I turned blonde Brunson into blood Brunson,” said Cannonier.

Cannonier also made it clear that he should fight next for the middleweight title. “I want to say this while I look Dana in the eye. Hey Dana, Dana look at me. Quit distracting Dana, get him, get him. Dana, I want that shot next. I get that shot next. It’s me. Nobody else, me.”

Cannonier opened the fight landing several strikes. Brunson was able to take down Cannonier, who was able to get up to his feet with relative ease. Brunson continued to go for takedowns but Cannonier successfully defended several takedowns. Eventually, Brunson got his second takedown and stepped over into mount. Cannonier got back to his feet and landed a head kick. After Cannonier missed a punch, Brunson landed a counter that dropped Cannonier. Brunson jumped on the back and locked in a rear-naked choke but the bell saved Cannonier.

Brunson immediately opened the second round with a single-leg takedown. Cannonier worked his way up to his feet and landed a big right hook. Brunson looked a bit off as he came forward and landed a right hand. Cannonier landed a right hook and continued to win the standup exchanges. Out of a break, Cannonier landed a short elbow and a back fist that hurt Brunson badly. Cannonier dropped Brunson and started landing a combination of powerful punches and elbows that lead to Brunson’s corner throwing in the towel.

Cannonier and Brunson both entered UFC 271, knowing that a victory would almost certainly earn them a title shot against the winner of the main event. Cannonier entered as the third-ranked middleweight, one spot ahead of Brunson.

Since moving to middleweight, Cannonier has been on a roll. In his last fight, Cannonier defeated Kelvin Gastelum, giving him four wins in his previous five fights ahead of Saturday’s fight. The lone loss at middleweight for Cannonier came at UFC 254 when Cannonier broke his arm in a loss against former champion Robert Whittaker.

Brunson entered the fight on a five-fight winning streak. The last loss for Brunson came against current middleweight champion Israel Adesanya at UFC 230. Despite being on the best run of his career and so close to a title fight, Brunson has stated that he will retire after his next two fights.

UFC 271 took place on Saturday, Feb. 12, 2022, live from the Toyota Center. Follow along with FanSided MMA, who is on-site, for all your news and highlights.