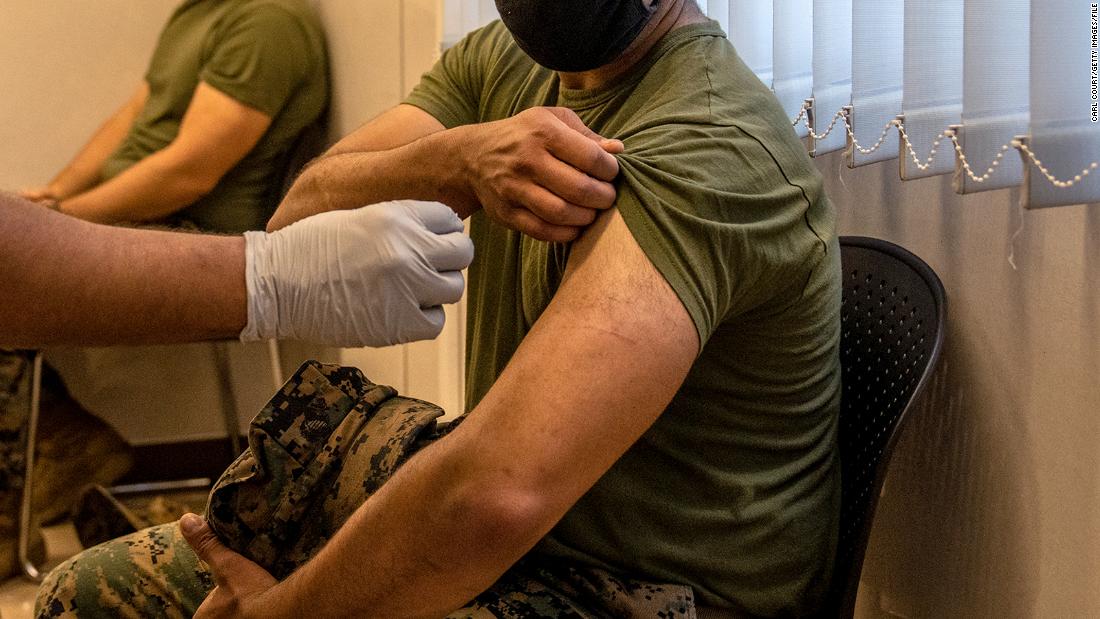 The Marine Corps has approved religious exemptions for six Marines and the Air Force has approved nine requests for exemptions. The Navy has given conditional approval for a member of the Individual Ready Reserve, but that member would have to be fully vaccinated before returning to service.

The military’s vaccine mandate, instituted shortly after the US Food and Drug Administration granted full approval of the Pfizer/BioNTech Covid-19 vaccine, has faced legal challenges, despite the high vaccination rate of service members. A federal judge in Georgia ruled this week that an anonymous Air Force officer who was denied a religious exemption does not have to receive a Covid-19 vaccine because of her religious beliefs.

Judge Tilman Self ruled that the mandate violated the officer’s religious freedoms. “What real interest can our military leaders have in furthering a requirement that violates the very document they swore to support and defend?” Self wrote in his order.

While the ruling only applies to the one officer who filed the lawsuit, the order in her favor could encourage other challenges to the vaccine mandate.

In a separate, ongoing federal case in Texas, a judge ruled that the Navy could not take adverse actions or punish a group of 35 Navy SEALS who claimed a religious exemption from the requirement. Meanwhile, a number of Republican governors have challenged the mandate for the National Guard, asserting that they are the commanders of the state units, not the federal government. Defense Secretary Lloyd Austin dismissed those objections, arguing they do not negate the need for what he has long considered an important military medical readiness requirement.

These cases remain the exception. The active duty military, composed of more than 1.3 million service members, is more than 97% vaccinated, while the total force, including reserves and the National Guard, is approximately 90% vaccinated.

Marines have requested a total of 3,595 religious exemptions, according to the latest data from the Marine Corps. As of this week, 640 Marines have been separated from the service for refusing the lawful order to receive a vaccine.

The Air Force has approved a total of nine exemptions and rejected 3,381. Another 2,664 requests are still pending. The Air Force has separated 160 service members for refusing the vaccine.

The Navy has received 3,369 religious exemption requests, but none have been approved, according to data released by the service. A total of 247 active duty sailors and one reserve sailor have been separated for refusing the vaccine. There were another 22 entry-level separations for those refusing the vaccine within their first 180 days of active duty.

The Army has received 3,088 religious exemptions requests and granted zero of them. The Army only recently put into place its separation policy and has not yet discharged anyone for refusing the vaccine, according to the latest data.