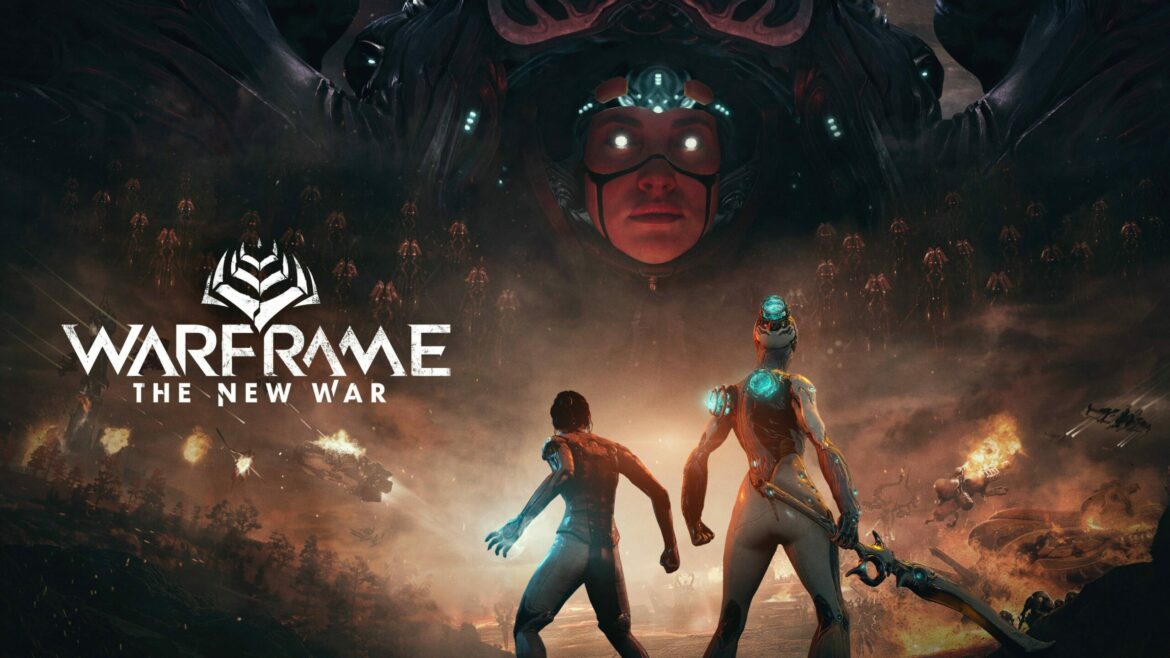 Warframe The New War is finally here as the update is now available for download across all platforms, with the patch notes shared by developers to detail all the new changes, improvements, and bug fixes.

Only a few hours after launching the gameplay trailer for The New War, Warframe now receives the much-anticipated content that delivers the biggest cinematic expansion of the game to date.

CHECK THIS OUT: The Witcher 3 Actor Who Voiced Vesemir Sadly Passes Away

The New War delivers a story-driven questline as well as a brand new Warframe, and three other playable characters, but that’s not all! The new expansion brings new cosmetics, new decorations, and tons of bug fixes and improvements. Also, it changes the Warframe experience in some ranks for new or early players of the game.

Below, you can find all the requirements for The New War expansion as well as bug fixes, rank changes, and optimizations improvements.

Have “Prelude to War” completeWe have renamed the former “The New War’ Codex section to “Prelude to War”, players must have this complete to participate in The New War Quest. Own a NecramechNecramechs can be earned by playing Deimos content or bought in the Market for Platinum.Own a RailjackA Railjack can be earned by completing the Rising Tide quest or bought in the Market for Platinum.

We’ve changed the “SKIP CINEMATIC” confirmation when playing Quests to a “HOLD TO CONFIRM” instead of clicking OK. This is aimed to save players (like myself) who accidentally skip cinematics from button mashing, which could heavily hinder the Quest storyline experience. This change does not affect regular gameplay cinematic skipping (mission fly-in / drop-down, etc).Companions will now receive 100% of the Affinity from kills you make. This matches shared Affinity functionality (you receive 100%, Companion receives 100%).Moved the Ghoul Bounty Aya drop to the Final phase as opposed to being in a majority of the Phases. As indicated here. Updated the Operator Voice icons to better reflect their titles.You may have already noticed this upon login, but emails displayed on the Login screen will now always be censored, regardless of having Creator Mode enabled or not. Your email will display only the first and last two letters before the domain, with the letters in between censored as asterisks. Additionally, we have updated the login email lock icon hover text to read ‘Unlock and clear Email’ to clarify its function. Creator Mode still censors your email to be all asterisk. The email domain is not censored by default, so if you wish to hide your entire email, please use the Creator Mode toggle in your Gameplay settings.Moved the K-Drive Race objective markers down closer to the actual K-Drive instead of floating many metres above. Increased back away distance for Grineer Lancers finding cover, so that they can shoot for longer. Enemies are now more likely to throw grenades at a target in cover. Removed Tenet Livia, Primary Kitgun beam-based weapons, Cadus, and Volnus Prime from the Conclave. These new weapons slipped into the Conclave without a proper balance pass.Set max instances on Mirage’s Eclipse loops so they don’t multiply out of control when Hall of Mirrors is used.Adjusted the Grineer Rampart context action offset to prevent clipping with the mesh. AI cover positions have been tweaked to be more consistent. Brachiolysts will now take damage when disarmed instead of equipping electroprods. Decals on Harrow’s Condemn now uses Deferred Rendering for better performance. Made slight adjustments to the Spritsail Prime Chest Plate when equipped on Nidus. Rescue Targets are now far more unlikely to go after an AFK player over an active player. Juno Geminex Moas’ projectiles’ AOE damage now respects line-of-sight and won’t deal damage through cover.Changed the Dojo Orokin Lab description to “Void focused research” to remove outdated Solar Rails indication.The Quest Codex section is now ordered based on their release dates! The Quests you have yet to complete will remain at the top of the list for ease of access. Shading improvements have been made to older hair materials to add more depth!

Fixed Companions not receiving shared Affinity from other players when you are in Necramech or Operator.Fixed a script crash in The War Within Quest when Transferring to Operator.Fixed inability to proceed in the Junction Specter fight if you died at the exact moment the Specter also perished. Fixed a spot-load that could occur shortly after an enemy Kuva Lich spawned.Fixed Steel Path Hijack escort object having normal level Health. Fixed enemies struggling to target the Hijack escort target. Fixed Junction Specter being of normal level when attempting to complete it in Steel Path.Fixed Client players seeing “Mission Failed” screen after leaving Railjack between missions.Fixed Transferring between Operator and Warframe in The Index would duplicate the Financial Stress debuff.Fixed an issue with spot-loading Archwing, K-Drive, Necramech, etc. when returning to the Orbiter (i.e. loading screen when returning to ship would “freeze” while fading out). Fixed being able to ragdoll yourself through Cambion Drift doors using the K-Drive.  Fixed Titania’s Solstice skin missing the ‘Prime Details’ toggle. Fixed the hit effect missing from the Hek and Sobek. Fixed Aya dropped in Open Zone Bounties having stretched icon images. Fixed players not taking damage over time outside a Purifier bubble if Armor is 0% in Infested Salvage missions (Oestrus, Eris).Fixed Yareli being able to enter  Orphix fields by riding into it on Merulina. Fixed the Operator energy circle in the bottom right of the screen being greyed out. Fixed being unable to install the Forma you purchase from the Arsenal Warframe upgrade screen. Fixed locked Nightwave Acts showing how-to instructions for completing the Act. Only unlocked Acts will show how-to instructions to avoid spoilers. Fixed script error when opening Prime Resurgence schedule from Varzia’s wares. Fixed Mind Controlling a Thrall as Nyx preventing it from being killed by a melee finisher. Fixed missing button callouts to move mouse/joystick left/right while rotating a decoration. When the left button rotates a decoration, you now get a hint to move the right stick left/right, similar to when scaling, you get a hint to move the stick up/down. Fixed Clients joining Host missions not seeing pickup resources after a Host Migration. Fixed Gauss’s gauge in Redline having a puffy smoke effect around it. Fixed an issue where clicking the plus icon in the squad panel while in Solo mode would give two error popups.Fixed the Vacuum-type mods (either Sentinel or Companion based) not working all the time if Clients playing Yareli are riding Merulina. Fixed being ejected from K-Drive and falling through when driving into the map border of the Plains of Eidolon when over water. Fixed script error with the Teralyst.  Fixed issue with Transmissions sometimes being inaudible. Fixed script error with the Aerolyst’s projectiles. Fixed issue where boss fights can be triggered while the player is out of room as Operator, locking them out of the fight.  Fixed animation issues where enemies would switch back and forth if you shot at the ground near them. Fixed being able to dodge Trading zone restrictions in Maroo’s Bazaar around Varzia by jumping. Fixed spot-loading from generating Kuva Lich weapons from Larvlings in-mission. Fixed Dojo Decorate Mode HUD legend only showing two options if opened through the Dojo console rather than the menu. Fixed missing Tenno Guide prompts after some Quest stage completions.Fixed script error when duplicating Decorations. Fixed several Armor attachments clipping through Nidus’ Kuvael Scrounger Skin.Fixed a harmless script error that could occur when fighting the Exploiter Orb.Fixed a script error that could occur if you caught a Fish soon after a Host migration.Fixed Deimos Claws Skin appearing incorrectly in mission when equipped to Keratinos.Fixed the Archwing loadout preview not functioning after changing your Necramech weapon. Fixed Juggernaut’s stomp attacks no longer spawning new enemies.Fixed inability to place Decorations properly on the Codex table in the Orbiter. Fixed a flickering glass texture in one of the Corpus Outpost Spy windows of the central tower when viewed from the doorway into the room.Fixed Chains of Harrow Quest mission on the Corpus Ship tileset being overly dark. Fixed inability to view the Railjack Mods Worm’s Torment and Granum’s Nemesis in the Codex.Fixed Stalker spawning in a Junction and pushing you outside of the level.Fixed Disarming an enemy who is held by Xaku Gaze, Loki Radial Disarm, Baruuk Desolate Hands & Serene Storm, Naramon Disarming Blast, Mag Magnetized Discharge Augment, or Kubrow Neutralize results in them counting as a required kill for mission progress.Fixed multiple issues when rapidly clicking Quests in the Codex.Fixed Syndicate Relic Pack incorrectly stating a “guaranteed Rare”, as it was pulling the description from the Market Relic Pack. Fixed Nightwave Act description for Day Trader claiming only 1 win is required when in fact it’s 3. Fixed Titania’s Razorwing kills in normal ground missions counting toward the ‘From On High’ Challenge progress.

If you want to read the full details of the new expansion, including the new decorations and abilities of the new Warframe, check out the update’s dedicated page.