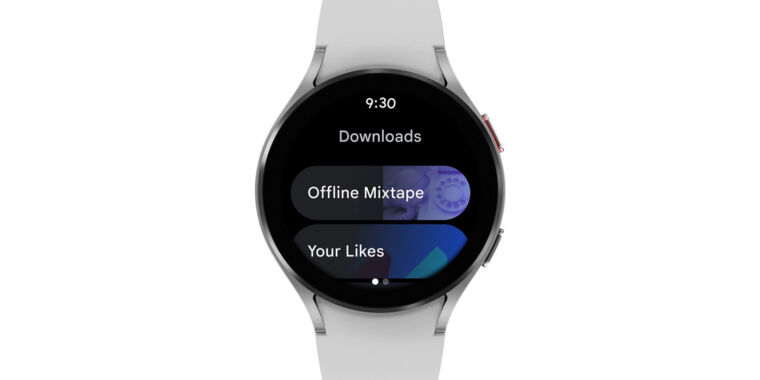 The YouTube Music app, finally on Wear OS, but only version 3.

The play screen with all the usual buttons.

You have to download everything to play it, which will be tough on your tiny smartwatch storage.

After almost a year of not providing a music service to its smartwatch users, Google will once again give its smartwatch OS users access to the company’s music service, although that move comes with a lot of caveats. YouTube Music is launching an app for Wear OS.

Google killed Google Music last year in favor of YouTube Music, even though the latter wasn’t nearly ready. While Google released an Apple Watch YouTube Music app before Google Music was shut down, one of the many regressions from the service switch was that Google Music supported Wear OS and YouTube Music did not. Now, after 10 months of Google smartwatch downtime, Google’s music service is coming back to Wear OS.

9to5Google’s Ben Schoon went hands-on with the new YouTube Music, and while the UI looks pretty much as you would expect, the app doesn’t support streaming music. You have to download the music for offline playback and store it on the watch’s 16GB of internal storage. Downloading music is locked behind the YouTube Premium monthly subscription, which makes sense for streaming music users who haven’t purchased any music. YouTube Music also supports uploading purchased music to private cloud storage, though, and there’s no policy carve-out for those people. For music uploaders, it looks like this is yet another case of YouTube Music charging people to play the music they already own.

Being exclusive to Wear OS 3 is another interesting caveat. Schoon found the app is written with Android 11 (SDK version 30) as the minimum API, which means that trying to sideload YouTube Music onto an older Wear OS 2 watch (which are all based on Android 9) won’t be an option. The Google Music Wear OS app had more features and wider compatibility than YouTube Music, so it’s not clear why the minimum API has been set so high.