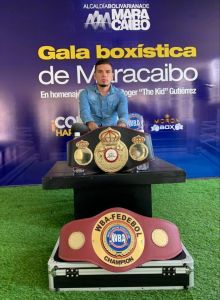 To inspire the youngest. That is the task that the World Boxing Association super featherweight world champion, Venezuelan Roger Gutiérrez, has set for himself.Gutiérrez is getting ready for a new defense of his world title in his hometown, Maracaibo, and is looking forward to the tribute that his city will pay him on October 1st, during the boxing gala that will be held in his honor.

“I am very happy with this event they are preparing, because it gives us an opportunity to promote young talent from Zulia, which is something I am determined to support,” said “The Kid”.

The Maracaibo Boxing Gala to be held at La Curva de Molina, a city landmark, will offer a 10-fight show, with two WBA regional titles, and female and amateur bouts, as a window for new boxing talent from the region.

In a press conference held in the Zulia capital, Gutierrez informed that one of his greatest aspirations is to support the boxing schools in the region and serve as an example to the younger ones.

“I am already doing it. Visiting schools and supporting in whatever way I can. I was born to be a boxer, and to those kids who are now in boxing, I want to motivate them with my example,” he said.

“Nothing is free. I set a goal, I worked very hard to try to reach it. I stumbled many times but I learned from my falls, I got up and kept believing in myself, I kept fighting for what I wanted, with the support of my mother and father. Then I lost them, which have been the hardest blows life has given me. I could have given up, but in honor of them I kept going until I reached the world championship. Now I fight for their memory, for my family, for Zulia, for Maracaibo and for my country, and that is what I want the children and young people to see, that if I have been able to achieve my goals, they can also do it, in boxing, in their studies, in whatever they propose”, added Gutiérrez.

The Zulian has already started his preparation for his second world title defense, which will be against the American Chris Colbert. The date of this fight is expected to be announced in the coming weeks.

Rafael Morón, Roger Gutiérrez’s representative and promoter of the event, informed that the boxing gala will have Kelvinyer Salazar and Robinson Garcia in the main event fight, with the WBA Fedecaribe lightweight title at stake.

“We will have two regional titles, one Fedecaribe and the other Fedebol, which we are finalizing,” he said. “We will also present women’s and amateur boxing, to make room for young Zulian prospects. It is the first step of a project we have set out to turn Maracaibo into the Venezuelan capital of boxing”.

“I am very grateful to the authorities of Maracaibo for this tribute,” Gutierrez emphasized. “But most of all for that, for the opportunity to bring international boxing back to the city and to be able to help new boxers to show their talent. I am sure that just as they have supported me in my career, and in the last two fights with screens in the streets, the people of Maracaibo will come to accompany us in this event,” he concluded.