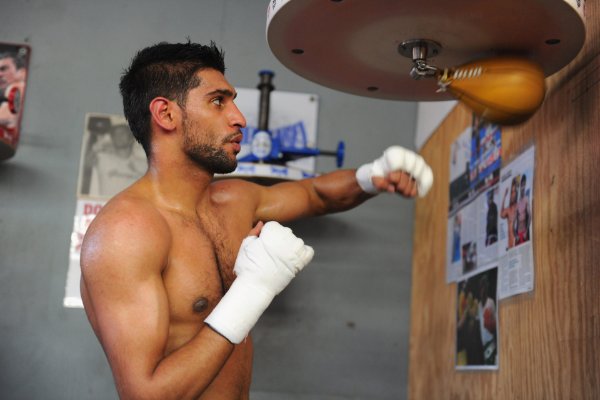 With Crawford and Khan facing off against one another in April of 2019, Bomac watched from the sidelines as he successfully guided Crawford to a one-sided sixth-round stoppage win. Despite the back and forth war of words between both camps, Bomac now finds himself cheering Khan on.

The longtime trainer has carefully worked with Khan for several months as the former 140 pound titlist is preparing to take on fellow Brit, Kell Brook. Although he was initially shocked by team Khan reaching out, Bomac reveals that their relationship has been smooth sailing.

“I believe his wife, Faryal, got in contact with one of the trainers,” said Bomac to Boxing Social. “Another guy had hit me up on Instagram so we kind of came together and talked a little bit. He came out to Omaha for like a week to have a good conversation and sort out the business and try to train with us for a little bit. That went really well. Couple weeks later, we headed out to Colorado Springs and he came out there.”

What ensued soon after, was a tight-knit relationship between not only Bomac and Khan but also Crawford and Khan as well. In addition to allowing Bomac to mold him as he sees fit, Khan also views their partnership as one that makes sense.

One year following Crawford’s explosive win over Khan, the multiple division titlist and current WBO welterweight champion, scored a fourth-round stoppage win over Khan’s upcoming opponent, Kell Brook. Crawford navigated through several early difficult rounds before landing a crisp jab in the fourth. A stunned Brook stumbled across the ring and wilted under a nonstop barrage of hard shots.

Considering his familiarity with Brook as a fighter, Bomac believes since he was able to topple him once, doing it once more shouldn’t be an issue.

“I figure if I can beat Kell Brook one time, I can beat him a second time. It was a pretty easy decision.”

But, regardless of Bomac’s confidence, he realizes that he won’t be stepping into battle with a pound-for-pound star this time around. The longtime trainer acknowledges that his initial game plan used to defeat Brook is extraneous at this point. In spite of that, Bomac believes that he’s built enough rapport with his new fighter to lead him to victory.

“It’s gotta be a different game plan because Amir is a whole total different fighter. You have to know what your fighter is capable of. The game plan will be different because of what he brings to the table as a fighter.”