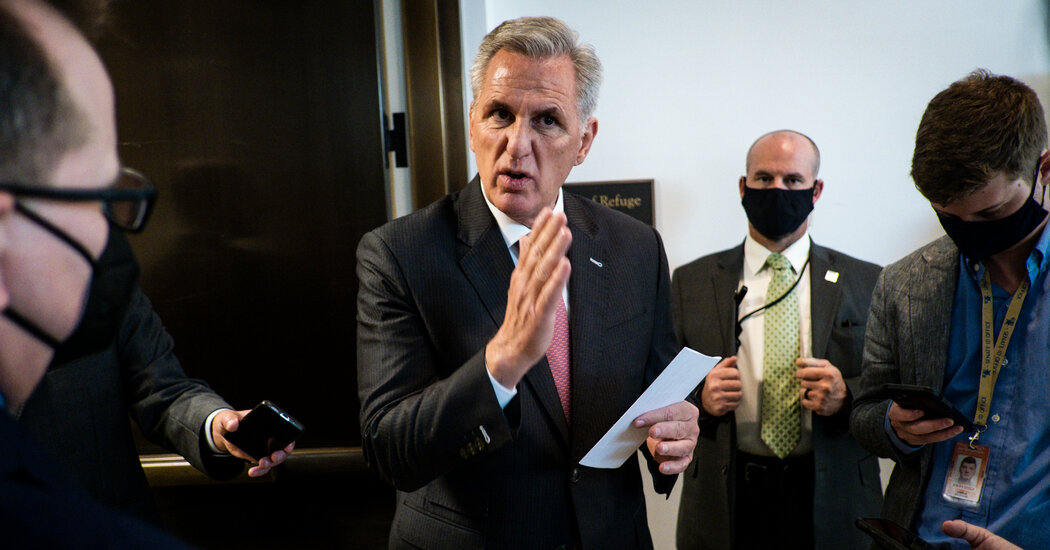 Last month, he defended the Republican National Committee after it passed a resolution to censure Ms. Cheney and the other Republican member of the Jan. 6 committee, Representative Adam Kinzinger of Illinois; the resolution said they were involved in the “persecution of ordinary citizens engaged in legitimate political discourse.” In contrast, Senator Mitch McConnell of Kentucky, the Republican leader, castigated the party.

In private talks to donors, Mr. McCarthy often does not mention Mr. Trump as he makes his aggressive pitch about the coming “red wave” and what Republicans would do should they reclaim the majority.

But he is often asked whether Mr. Trump intends to run for president.

Mr. McCarthy has told donors that Mr. Trump has not yet made up his mind and that he has advised the former president to see whether President Biden runs for re-election. Mr. McCarthy also often mentions former House members who he said could make for serious presidential contenders, including Senator Tim Scott of South Carolina and Gov. Ron DeSantis of Florida.

Ivanka Trump. Former President Donald J. Trump’s eldest daughter, who served as one of his senior advisers, is said to be in talks with the House committee investigating the Jan. 6 attack on the Capitol about the possibility of sitting for an interview with the panel.

Civil lawsuits. A federal judge in Washington has ruled that three civil suits against Mr. Trump related to the Jan. 6 attack on the Capitol can move forward. The ruling means the plaintiffs could seek information from the former president over his role in the events.

Classified information. The National Archives said that it had uncovered classified information among documents that Mr. Trump had taken from the White House with him when he left office. The discovery casts new doubts on the former president’s handling of government records.

On Capitol Hill, Mr. McCarthy’s basic problem comes down to math. Leadership positions in the House can be secured with a majority vote from the members of each party. But the speaker is a constitutional official elected by the whole House and therefore must win a majority — at least 218 votes.

In 2015, after the most conservative House members drove the speaker, John A. Boehner, into retirement, Mr. McCarthy, then the No. 2 Republican, was the heir apparent — and he blew it. His biggest public offense was a television appearance in which he blurted out that the House had created a special committee to investigate the attack on a U.S. diplomatic compound in Benghazi, Libya, expressly to diminish Hillary Clinton’s approval ratings.

“I said multiple times at the time, we need a speaker who can speak,” recalled former Representative Jason Chaffetz, who challenged Mr. McCarthy for the speakership after the gaffe.