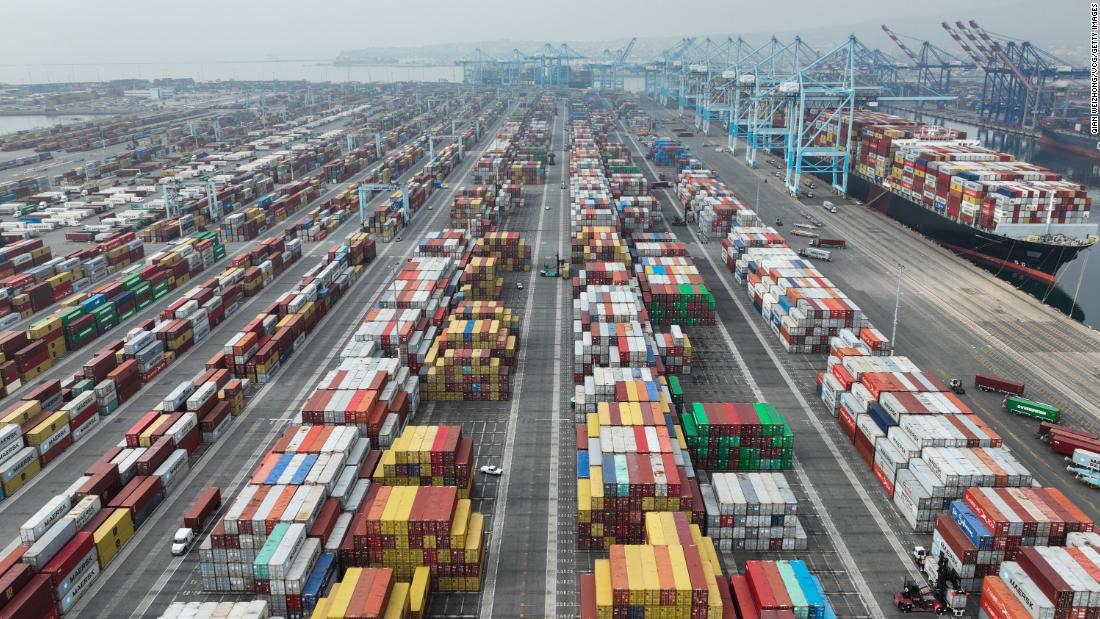 But on another front — supply chain backlogs — there are some welcome signs of relief.

What’s happening: An indicator tracking supply chain stress compiled by UBS has improved significantly after peaking in October, the bank said this week. It found that a quarter of bottleneck pressure has been reversed.

Its economists point to a number of data points. More air freight capacity is opening up as passengers return to the skies, reducing costs. Spending in the United States is starting to shift from goods to services. And outside of China, countries in Asia are moving away from “zero-Covid” policies, which implemented harsh restrictions that affected trade in order to limit infections.

“We attribute the sharp improvement in global delivery time indices in large part to the shift away from ‘zero-Covid’ in Asia,” UBS said. “The jump in production as restrictions were removed led to greater availability of goods and an immediate reduction in backlogs.”

Congestion at the ports of Los Angeles and Long Beach is declining, too. The number of ships waiting to be offloaded is down by half since early January, according to UBS.

That said: The bank’s economists admit there is “a lot of work to be done.” Getting hold of shipping containers remains extremely difficult and shipping costs are still elevated, according to data from Freightos.

“Right now the situation does not appear to be getting significantly better,” Maersk CEO Søren Skou told CNN Business earlier this month.

Why it matters: Whether the supply chain situation meaningfully improves will have major ramifications for policymakers as they try to rein in inflation.

One reason that the Federal Reserve spent much of last year referring to inflation as “transitory” was because its members thought supply chains would begin to normalize quickly, helping drive down the cost of goods.

That didn’t happen, and inflation has kept pushing higher — boosting the odds that the Fed will need to take a more aggressive approach to interest rate hikes that are expected to begin next month.

In minutes from the Fed’s January meeting, released Wednesday, the central bank said it revised up its near-term projection for inflation “in response to the anticipated slower resolution of supply issues,” though it still expects steady improvement.

“Participants generally expected inflation to moderate over the course of the year as supply and demand imbalances ease and monetary policy accommodation is removed,” the Fed said.

But it noted that risks to the outlook for inflation were “weighted to the upside,” and emphasized the role of supply chains in the puzzle. China’s zero-tolerance policy for Covid-19 could be particularly problematic, policymakers said.

Google plans to develop new privacy measures that remove the ability to track users across apps on Android devices — a move that could rattle digital advertising businesses like Facebook that have already been disrupted by app tracking changes introduced by Apple.

These solutions will operate without the individual identifiers that allow developers to track user activity on various mobile apps and create ads targeted to a user’s behavior and interests. Google said it is also exploring tech that would reduce the potential for a user’s data to be collected without their knowledge.

The announcement — which comes as Google and other Big Tech companies face mounting regulatory scrutiny over privacy concerns and other issues — was light on details. But it was enough to unnerve some investors in companies that rely on targeted digital advertising.

Shares of Facebook-parent Meta (FB) and Twitter (TWTR) dropped 2% on Wednesday. Snapchat (SNAP) shed 3%. Remember: These companies have already had to contend with an overhaul Apple (AAPL) implemented last spring to give users greater privacy and control over their data.

The change — which gives users the option to opt-out of having apps track their behavior — contributed to Meta’s huge market wipeout earlier this month. The company said Apple’s tracking change is expected to have a $10 billion impact on its bottom line this year.

Like many entertainment companies, ViacomCBS (VIACA) is going all in on streaming, and wants its name to match its ambitions. This week, the company announced that it would change its name to “Paramount,” an homage to its Paramount+ service launched about a year ago.

“An iconic global company deserves an iconic global name,” CEO Bob Bakish and Shari Redstone, the non-executive chair of the company’s board of directors, told employees in an internal memo on Tuesday. “One that reflects the power of our content; one that reflects our role as stewards of a rich heritage and as leaders in the future of entertainment.”

“Our prior bullish thesis was largely predicated on [Viacom] being a potential attractive target amid a wave of industry consolidation,” said Bank of America analysts, who downgraded the company’s stock. “Our views on this have not changed, however it does not appear a potential sale is imminent.”

Paramount wants to hit 100 million subscribers by 2024, and plans to spend big on content to make this happen. But according to Bank of America, “swinging for the fences increases risks” and will eat into profits in the near-term.

AutoNation (AN), Palantir Technologies and Walmart (WMT) report results before US markets open. Roku (ROKU) follows after the close.

Also today: US housing starts and building permits for January arrive at 8:30 a.m. ET, along with initial jobless claims for last week.