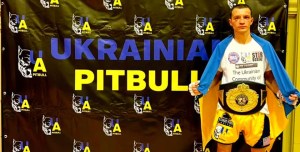 Oleh Dovhun’s main goal in his career is to become a world champion. With his victory last Saturday against Glenn Dezurn, he hung on to the WBA NABA super bantamweight belt and took another step in the right direction.

The “Ukrainian Pitbull” made a big impression at the Cathedral Room at St. Nicholas in Pittsburgh, Pennsylvania, and earned three 100-90 scorecards from the judges.

The venue was packed with Ukrainian fans, who were thrilled with the action and cheered on the 27-year-old fighter for his victory against the American last Saturday.

“I want to thank everyone for your support. You guys are the best. I heard everyone screaming loudly and it was amazing,” he told the fans after his victory.

Dovhun is clear about what he wants and that’s why he didn’t hold back his goal when he offered statements after the fight: “With such support we will be world champions. God bless America!”.

The southpaw boxer defeated an experienced opponent, he did it comfortably and his name starts to sound in the division. Now he will rest until next year, when he will face new challenges to continue his quest for a world crown.