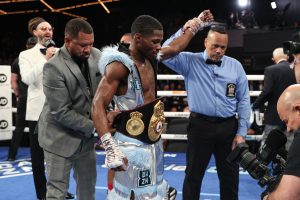 The young American had one of the best performances on the undercard of the event featuring George Kambosos and Teofimo Lopez in the main event. Ford displayed all his skills and got the technical knockout in the eighth round after dominating on all cards for the previous seven rounds.

The 22-year-old New Jersey native has been growing in his career over the past few months. It was the first defence of the WBA regional belt, which he won last August, and he did it on the undercard of a great evening to leave a great feeling.

The undefeated fighter has 10 wins, 1 draw and 6 knockouts. In the case of the Puerto Rican Caraballo, his record dropped to 13 wins, 4 losses, 2 draws and 9 knockouts.