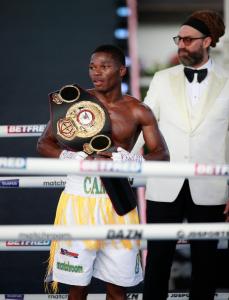 Raymond Ford will defend his WBA Continental Americas title against Edward Vazquez on Saturday night. The Footprint in Phoenix, Arizona will be the venue for another appearance for the featherweight prospect.

Ford is a native of New Jersey and has been making his way in the tough 126-pound division. Nicknamed “Savage”, he is a fighter with good tools and occasional power who knows how to use his combinations well to overwhelm his opponents.

Vazquez presents himself as a tough challenge this time around. The 26-year-old American of Mexican descent is undefeated in his career. He has fought on several occasions for regional titles of other organizations and plans to use his good boxing to frustrate the champion and take his crown.

Although he is not a puncher, the Texas native has knocked out his last two opponents and comes into a big night with enough confidence to make his name known to the world.