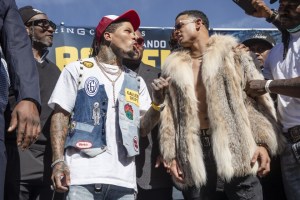 World Boxing Association (WBA) lightweight champion Gervonta Davis and Rolando Romero began the promotion of their December 5 bout with a press conference at the Staples Center in Los Angeles.

The American southpaw will make the second defense of his title against Romero, an undefeated fighter who is the logical challenger since he was the interim champion before the start of the WBA title reduction plan.

Gervonta has experience on his side and has appeared calm in front of an opponent who has been trying to get him out of focus with different comments on social media.

“I’m grateful to be here to give the fans another great fight. This is what we do. Rolly is here just to talk. He’s trying to fight his way to win, but he’s scared. I come to fight,” said the 26-year-old fighter.

However, at some point in his speech he accepted that I’ve been annoyed by everything Romero has said, “He’s supposed to come here and sell the fight. I’m supposed to win. I’d rather punish him for 12 rounds than knock him out quickly. Part of me wants to humiliate him, but the most important thing is to go out there and get the job done.”

“Rolly”, for his part, continued with his challenging speech and only thinks of victory. The Cuban-born American has been attacking Gervonta and has promised a knockout against the lightweight champion.

“You’re all going to see on December 5, I’m going to knock Gervonta out. I hope you hear that. I’ve been calling out ‘Tank’ since 2017. We were supposed to train in 2018 and he didn’t show up to the gym. On December 5, I knock you out,” the undefeated fighter said.

The 27-year-old fighter referred to comments from different analysts, who claim that between Gervonta’s technique and his there are many differences in favor of his rival.

“Manny Pacquiao also has a strange style and look at everything he has achieved. Just because I fight differently, does that mean I don’t have skills? I have my own skills and they have gotten me this far,” Romero stressed.

Davis and Romero will return to their training camps and continue their preparations as they look forward to their next promotional activity with about six weeks left until their showdown.