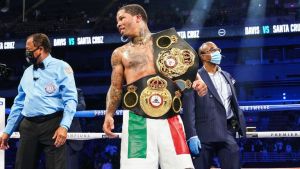 Gervonta Davis will take on a big challenge next December 5 in defense of his World Boxing Association (WBA) lightweight crown against Mexican Isaac Cruz.

“Tank” knows the type of opponent he will be facing at the Staples Center in Los Angeles, and this week he held an online press conference in which he spoke about Cruz and the fight ahead of him.

“This will be great for the fans and another exciting night for boxing. May the best man win. We both come in at our best,” Davis told the press.

Although he was first set to face Rolando Romero, different problems prevented the American of Cuban descent from showing up, making way for an equally fierce opponent like “Pitbull.”

“You always have to adapt in boxing. No matter what comes your way. I’m going to adapt to Cruz.” Every day I find out how he’s thinking and what he’s going to bring to the fight. Cruz has impressed me in his past fights. He’s coming here to win. He’s not looking to just hold on. He wants to come in and take the win. He’s not an opponent I can overlook. A win over him would be very important to me,” admitted the 26-year-old champion.

Gervonta is in the final part of his preparation and said he feels better than ever. His fight against Cruz will be one of the best of the year because of their styles and the expectations that are being generated around it.