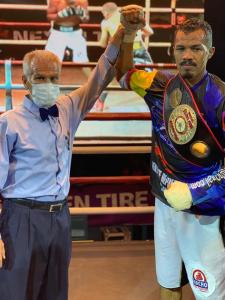 Johan Gonzalez gave a great show of strength on Saturday night and won the World Boxing Association (WBA) Fedelatin super welterweight title by a fifth round technical knockout over his countryman Adrian Perez.

The event organized by Morón Boxing in association with the Probellum company had several interesting fights, including the victory of Gonzalez, who forced the referee to stop the fight with 1:37 minutes left in the fifth round.

The 30-year-old fighter worked with power punches to the face of Perez who was quite frontal in the fight and was able to hurt him as the rounds went by. The nicknamed “Manotas” started aggressively from the first bell to show that he was stronger and it was evident from the start that it was a matter of time before he would win.

Gonzalez won the regional belt and improved his record to 28 wins, 1 loss and 28 knockouts. Perez now has a record of 16 wins, 7 losses, 1 draw and 14 knockouts.