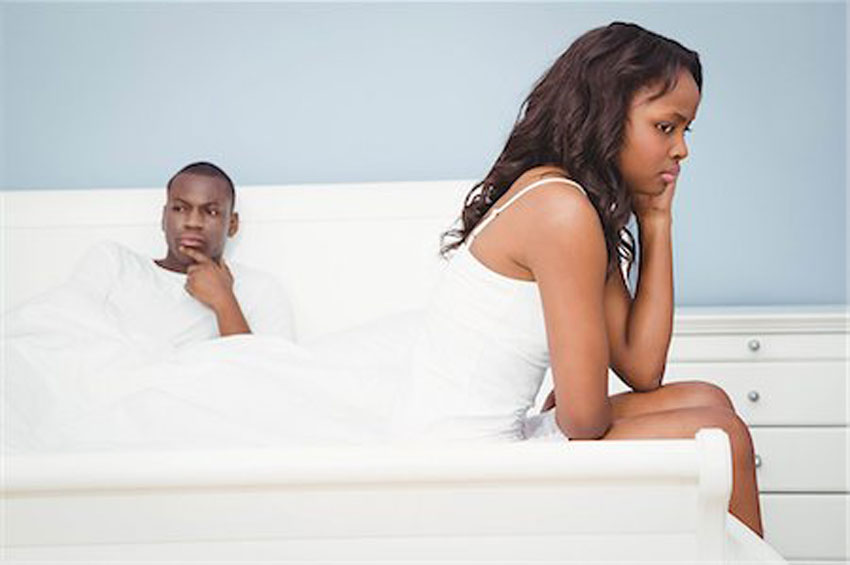 Is it just in your head, or does she seem less-than-jazzed about having sex with you lately? Communication, we always say, is a key part of having a great sex life—in fact, it is perhaps the most important part. If you ask your wife or girlfriend about her diminished appetite for sex directly, she might feel compelled to protect your feelings by insisting that everything is fine, when in fact she finds your sexual routine to be a bore and a chore.

There are some telltale signs that she’s not feeling wowed by you lately, that maybe she’s a little less satisfied than she could be.

Should these 10 occurrences start to seem eerily familiar, she may not be satisfied, which means it’s time for a dirty reboot—especially if you’re married and have been forever.

Everyone goes through periods when they’re not feeling sexually amped. That might be related to a number of factors: Stress at work, a lapse in confidence, a hormonal shift, depression, or just plain exhaustion. But the sobering truth might be that she’s not just not picking up what you’ve been laying down lately. Do some careful probing and rule out those other reasons, then concentrate on changing up your game—perhaps by mastering the 25 tips that will turn you into a sex god overnight.

Statistics show that women need about 20 minutes of sexual activity to climax, on average. If she thinks an orgasm isn’t worth 20 minutes of sex that she doesn’t find exciting, pleasurable, naughty, or even comfortable, she may stop putting in the mental work required to make her orgasm happen. Alternatively, she may just think that you don’t have the wherewithal to make things happen for her. If she seems nonchalant about a recent spat of non-orgasmic play sessions, it could be a sign of her apathy toward your current repertoire. Time to make some changes. You can start by learning all the mistakes you’re making during cunnilingus.

4. She’s criticizing you in other areas

Although she might not want to discuss your performance to protect your feelings, she might end up critiquing other things about you as a proxy. Perhaps she’ll remark on your appearance, how you act, or whether you’re doing your share of household activities properly. Those little things annoying her about you wouldn’t seem so bad if you stepped back, took control of the situation, and start giving your best regularly.

When a woman knows what she wants and what she likes in the bedroom, it’s a very, very good thing. However, if she starts to micromanage your moves, it could be a sign that you’re not listening to her or her body and she’s not feeling satisfied. A bit of guidance is great, but if it’s starting to feel like she’s constantly teaching you how to have sex with her from scratch, you’re probably bombing in the sack. Though if you find yourself in the reverse position, so to speak, (i.e., you find yourself less than satisfied), learn how to turn your wife into a sex goddess.

6. She mentally checks out

At its best, sex is an activity during which there is no past or future—there is only the thoughts, emotions and sensations coursing through your nervous system at the very moment in time. It should never happen while you’re thinking about life’s mundanities or the ever growing “to-do” list in your head. If you sometimes feel that she’s not present when you’re having sex, it could be that you’re skills aren’t taking up a big enough chunk of her mental, sensual, and emotional bandwidth.

7. She mentions the great sex the Joneses are having

Girlfriends often talk about the sex they have, and if your partner’s pals are being brought to hitherto-unknown heights of ecstasy on a daily basis while she has nothing to brag about, she’ll feel like she’s chosen a dud. If she’s telling you about Dave and Lisa’s regular sessions of toe-curling sex on a regular basis, you probably need to go back to the sexual drawing board. Hell, why not take Dave out for a beer and get him to give you some pointers? Your goal: Making your partner gab to her friends about how amazing you make her feel.

8. She’s minding a gap affair is she satisfied

If someone isn’t getting their sexual needs met by their partner, they may turn to masturbation (see above) or an affair. They may, however, try and fulfill themselves in another way that might not even be directly connected to sex. Some people may indulge in food or alcohol, bury themselves in work or go on shopping sprees. Clues that she’s not feeling fulfilled may be lurking in your fridge, wine cooler or credit-card statement. If you think she’s not satisfied to the point of pursuing an affair, you should learn the 15 telltale signs that a woman is cheating on you.

9. She wants to get it over with
quick sex is she satisfied

Good sex is like eating a delicious dinner at an expensive restaurant. You want to savor the flavors, bask in the ambience and linger at the table. If she’d doing the sexual equivalent of scarfing down her linguine vongole and motioning for the check, chances are she’s not having a three-Michelin-star experience. Women and men can both love quickies, but if your every dalliance feels like she has somewhere better to be, she probably does.

10. She doesn’t want to cuddle
satisfied

If you make a woman feel satisfied and amazing during sex, she’ll want to be near you as she falls asleep or is anticipating your next go-round. If, however, you’ve put in yet another performance that she found lackluster—even frustrating—she won’t be eager to snuggle. If she turns her back as soon as your session is over, you probably need to rediscover your dirty mojo.