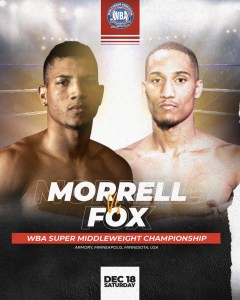 The 23-year-old West Indian will make his second and final fight of 2021 against an opponent with a good record and in the main event of the Premier Boxing Champions event.

Morrell is a quality fighter who won the crown in his third professional fight. He defeated Lennox Allen in August 2020 to win the belt and defended it with a big knockout against Mexico’s Mario Cazares in June of this year.

Fox is 29 years old and will be in his first world title fight. The Washington native comes into the bout with two consecutive wins, which is a good moment for him both physically and mentally.

One of Fox’s main tools is his 6’3” height, eight centimeters taller than the champion, and he reach, that he wants to take advantage of to make it a long distance fight and keep Morrell at bay this weekend.

Minnesota is already breathing a great atmosphere and promotional activities will take place during the week. This Friday will be the official weigh-in, where both must weigh 168 pounds in order to fight for the belt. Morrell has 5 career wins, with 4 knockouts, and Fox has 28 wins, 2 losses, 1 draw and 13 knockouts.