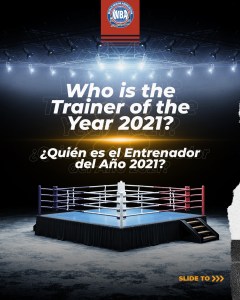 The 2021 Trainer of the Year award has many interesting candidates who had great influences on their trainees to achieve great victories that put them on top during the year.

Eddy Reynoso is already a must nominee year after year due to the work he has been doing in the Canelo Team and the achievements he has made by the hand of Saul Alvarez, the undisputed super middleweight champion. But beyond that, he has managed to help fighters like Ryan Garcia, Oscar Valdez, Hiroto Kyoguchi, Andy Ruiz, among others, who have shown great results under his tutelage.

Another outstanding trainer is Ben Davidson, who was in Josh Taylor’s corner to be a fundamental part of the achievement of his undisputed championship, in addition to working with Devin Haney together with his father as a team of trainers and having achieved the world featherweight title along with Leigh Wood.

Anatoly Lomachenko also had an important year as he and Vasyl managed to return to the top of boxing after overcoming injuries and painful defeats. Now “Loma” has regained his position at the top of the lightweight ranks and hopes to face the champions in the near future.

The WBA will debate with the fans about the candidates for trainer of the year through its social networks and the awards will be announced at the beginning of 2022.