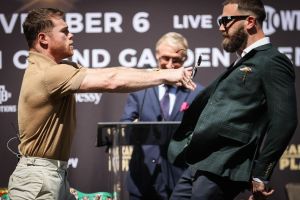 If the fight between Saúl “Canelo” Álvarez and Caleb Plant has generated great expectations in the world of boxing, after their first face-to-face they have grown even more because the atmosphere heated up during their first press conference held in Los Angeles, California.

The sunny afternoon brought the two fighters together in front of the press during their first promotional activity before their fight on November 6th, in Las Vegas. Álvarez owns the World Boxing Association (WBA) Super Middleweight Super Championship, in addition to the WBO and WBC belts, while Plant arrived with his IBF belt.

Both spoke to those present and promised to get the victory after their fight in Sin City.

Alvarez added that Plant is not on his level and that he will beat him before the eighth round to confirm himself as the best pound for pound boxer today. For his part, the American was also aggressive and highlighted his undefeated record, which he says he will keep after the night of November 6th.