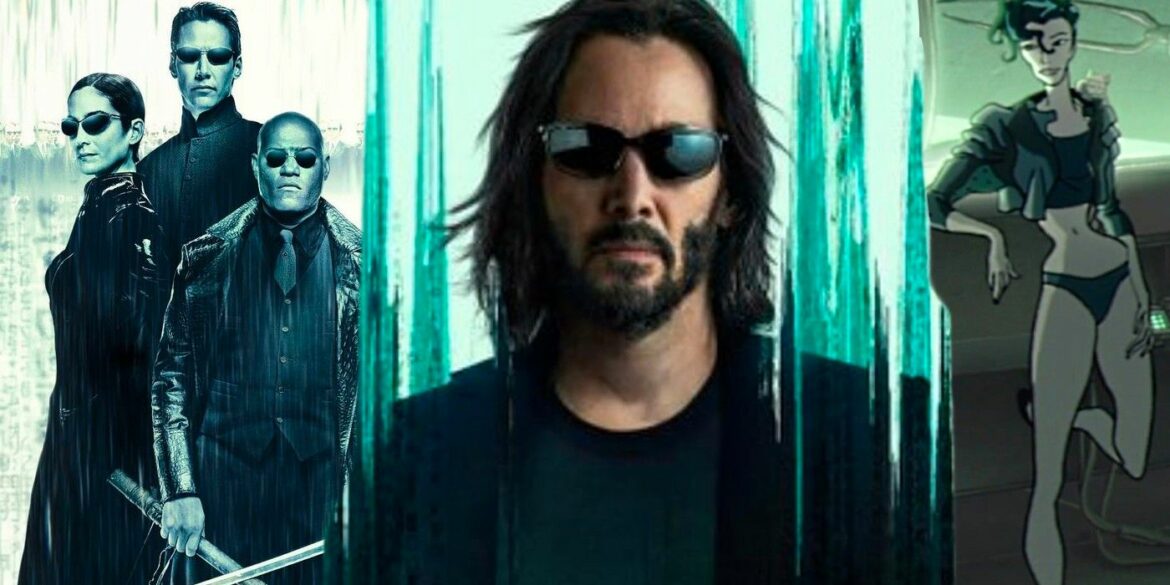 The Matrix trilogy was released in chronological order, but several additions to the story, like The Animatrix start to hop around the timeline, throwing the franchise’s best viewing order into question. The three feature-length films many people know about are The Matrix, The Matrix Reloaded, and The Matrix Revolutions, but The Animatrix and several canon video games expand the world and story in big ways. With the addition of Lana Wachowski’s The Matrix Resurrections to the franchise’s viewing order, a re-evaluation of the chronology is required in terms of

The Wachowski siblings kicked off their Matrix franchise with 1999’s The Matrix, starring Keanu Reeves as Neo, Lawrence Fishburne as Morpheus, and Carrie-Ann Moss as Trinity. The basic concept of The Matrix is that a young hacker, Neo, discovers the world he is living in is merely a fabrication cooked up by machines who have conquered the human race. He’s recruited by Morpheus and Trinity to take up their cause in fighting the machines in order to restore the human race. Since The Matrix premiered in 1999, there have been multiple movies, animated films, video games, and comics that have been created to deepen the lore, expand the world, and continue the Matrix story.

RELATED: Every Similarity Between Dune & The Matrix Trilogy

Diving into the Matrix franchise can be a rewarding experience, but parsing the exact chronological order can be pretty confusing, considering the depth and width of the franchise’s worldbuilding. The Wachowskis have created a wholly unique and unmissable world that blends elements of action, philosophy, religion, and technology. Whether you’re a repeat viewer of the series or you’re diving in for the first time, we have a few viewing order options for you to consider to maximize your Matrix experience.

One way to dive into the viewing order is to go by the release dates. The Matrix franchise has tons of materials, including comics and movies, which make for a more inviting experience. While the comics are a rich textual archive, we’re going to leave them by the wayside in favor of looking at the films, animated shorts, and video games. The release date viewing order goes like this:

The Matrix begins after key events have occurred, including the timeline of the machine rebellion and how they exerted control over humans. Despite this in media res feeling that comes with watching it, The Matrix is essential to view first if you want to get an inkling of the kind of world you’re dealing with. However, if one requires an in-depth look into the sociopolitical aspect of the world of The Matrix, one can have a look into The Matrix Comics, a collection of pin-ups and shorts that inform the wider world in interesting ways.

RELATED: Matrix 4: Neo Is Inside The Matrix Because Of Trinity – Theory Explained

As Neo is the audience surrogate and is new to the framework of the matrix, he learns lots of the rules and the basic backstory in the first film. This is similarly essential for the viewer to also know as they go deeper down the Matrix rabbit hole. Even while watching The Animatrix, which goes hard on the backstory of the world events that led to the humans being taken over by machines, the stakes don’t hit in quite the same way unless you understand just how extensive their control is, as seen in The Matrix and The Matrix Reloaded.

Another viewing order option would be to watch the feature-length films, the animated short films, and the stories underpinning each of the three video games in chronological order. You’ll have to make sure to break up The Animatrix specifically because the films do not follow a chronological order as they are presented nor do they neatly fall before, during, or after the events of the feature-length films. Because of this, The Matrix chronological viewing order looks like this:

The Animatrix: The Second Renaissance, Part I and II: Takes place in the mid-21st century and focuses on the events of the Machine War. The story is narrated by The Instructor, an interpreter of the Zion Archives where all of the pre-machine history is stored.The Animatrix: A Detective Story: Follows a detective named Ash who receives a phone call asking him to look into a hacker known as “Trinity.” The events of the film imply Ash’s investigation takes place shortly before The Matrix.The Matrix: Takes place in the Matrix’s version of 1999 but in reality, all of the events are happening closer to 2199.The Animatrix: Kid’s Story: Kid’s Story occurs shortly after Neo learns about the Matrix from Morpheus. A blue-pilled kid has dreams about Neo and tries to figure out if what he’s saying about the Matrix is true.The Animatrix: Final Flight of the Osiris: A direct prelude to both Enter the Matrix and The Matrix Reloaded. This story tells the events of the ship Osiris as it works to evade being captured by Sentinels and prevent the last human city of Zion from being destroyed.Enter the Matrix: The events of the game Enter the Matrix overlap slightly with Final Flight of the Osiris and The Matrix. The story parallels The Matrix Reloaded.The Matrix Reloaded: Takes place six months after the events of The Matrix.The Matrix Revolutions: Revolutions begins almost immediately after the events of Reloaded, meaning it takes place approximately six to seven months after The Matrix.The Matrix: Path of Neo (runs concurrent to films from the moment Morpheus offers the pill): Path of Neo’s story runs concurrent to all three feature-length Matrix films, so you can read the story or play the game after you’ve watched them. Interestingly, Path of Neo does offer an alternate ending.The Matrix Online: The Matrix Online centers around the race to gather up the fragments of The One (Neo) following the events of Revolutions. No specific time period is mentioned but it does take place after the feature-length trilogy wraps.The Animatrix: Beyond: Beyond takes place sometime after the feature films. It focuses on a group of teenagers in Japan who find glitches in the Matrix they exploit for their amusement.The Matrix: Resurrections: Takes place roughly 18 years after the events of Revolutions, opening up the universe in a meta manner, continuing the saga of Neo and his purported role in the future of humankind.The Animatrix: World Record: World Record is difficult to place because there are no discernible events that link it back to another place in time. However, this short is narrated by The Instructor, who also narrates The Second Renaissance, providing at least a link to a familiar character.The Animatrix: Matriculated: Matriculated’s time period is difficult to place because it features no clear hints about when its events are happening.The Animatrix: Program: Program is similarly tricky to place in the Matrix chronology for the same reasons as World Record and Matriculated.

Tackling the chronological Matrix viewing order is a beast of a task. This viewing order is only recommended for those who have either seen at least the films before or are looking for a pleasantly challenging way to engage with this world.

RELATED: How The Matrix Resurrections’ Social Commentary Has Totally Changed

While the chronological viewing order helps straighten out the narrative a bit better, it can be a bit unwieldy if you’re relatively new to the world of the Matrix. It’s best to have a baseline understanding of what the Matrix is and what the rules are before you can even attempt to dive deeper into the mythos. At the same time, it is important to note that the structure of the simulacrum is forever changing, making it difficult to chronologically map the events in a coherent manner, as space-time is fluid. So, it might prove a bit daunting to watch two films from The Animatrix first before you even get to the live-action movies, as the chronological order suggests. For this reason, we recommend watching the Matrix films, short films, and reading up on the video games based on the date they were released in. As a refresher, the viewing order looks like this:

How The Matrix 4 Fits Into The Viewing Order

As The Matrix: Resurrections succeeds the events of Revolutions from a temporal perspective, it should ideally be watched right after the official trilogy. As details about the plot of Resurrections are still under wraps, it is possible that the narrative revealed in the film can help enrich the franchise’s complementary materials, such as the games and the comics. Resurrections will not only continue Neo and Trinity’s tale while delving into a metanarrative with shifting symbology and semantics but also offer an insight into how the very nature of the matrix has evolved in the postmodern era. As the present era is overrun with technological advancements and a mounting reliance on projected selves, it will be interesting to see how the world of The Matrix behaves in accordance with these alterations. In essence, The Matrix franchise is a complex world that is steeped in lore and has been developed into one of the more narratively rich worlds offered by a franchise. Hence, getting the viewing order right is key if you want to make the most out of experiencing it.

NEXT: Matrix 4 Theory: Neo’s Return Is Part Of The Oracle’s Plan