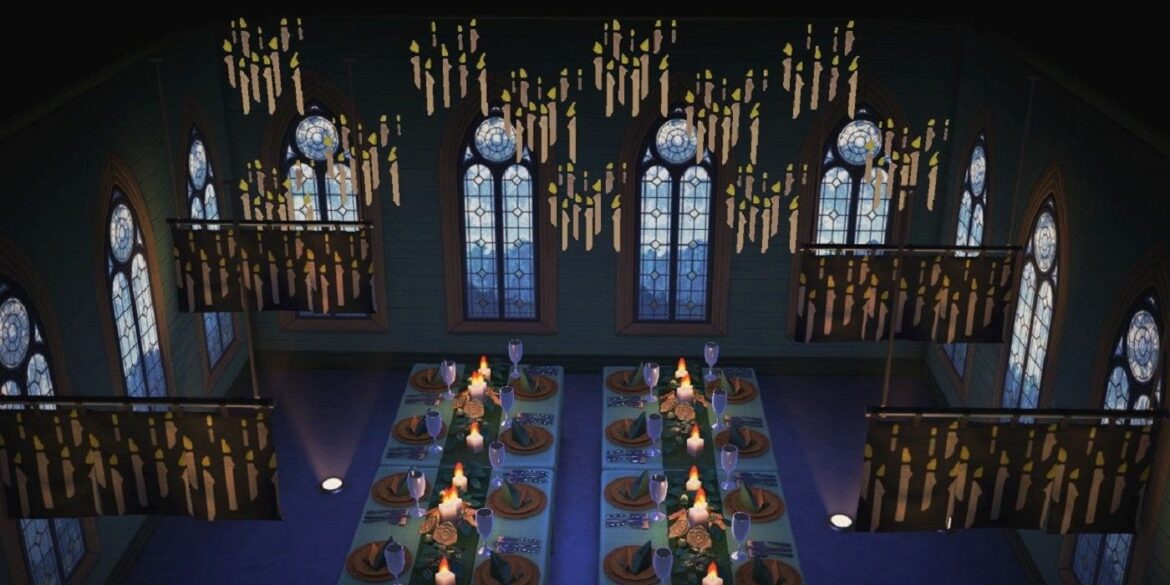 An Animal Crossing: New Horizons player has designed an elaborate recreation of the Great Hall from Harry Potter’s Hogwarts castle. Creating themed islands in New Horizons has been a popular pastime of fans since the game’s release in the spring of 2020, with some recreations only taking up small sections of land and others spanning entire islands. Because of the large number of decorative items, and the ability to create custom designs, builds can become complex and highly detailed.

Thanks to the recent release of New Horizons’ 2.0 update and its Happy Home Paradise DLC, there are even more options for big island projects. Using the DLC, players can gain access to new skills for designs like accent walls, mood lighting, and partition building. Each of these elements is enhanced by the thousands of new items introduced via both the update and the DLC. New Horizons has a surprisingly wide variety of items perfect for magical settings seen in Harry Potter, making it a popular choice for an island theme.

A New Horizons player known as DesignsByCaleb on Reddit has shared an impressive Harry Potter-themed project featuring the Great Hall from Hogwarts castle. The recreation includes long tables with place settings, ornate full-length glass windows, and the iconic floating candles featured in the Harry Potter films. The design even includes banners hung above the tables, though the low lighting of the hall makes the colors of the banners hard to see. The overall look is only missing hundreds of magical students and a cast of tired teachers waiting on Dumbledore’s beginning-of-feast speech.

Designs like the Great Hall can be the perfect opportunity for a large-scale photo shoot with friends. By opening a New Horizons island up to visitors, players can invite friends to their homes to see the carefully built structures, and be a part of the magic. Thanks to the Halloween costumes that can be purchased at Able Sisters, many may also possess a set of robes and a pointed hat perfect for a trip to a Harry Potter-inspired island. With enough visitors, the Great Hall could be staged for pictures inspired by movie moments, like a holiday feast or start-of-the-year Sorting.

Harry Potter isn’t the only iconic location that has made it into a New Horizons island design. Players have recreated locations from the Pokémon game series, as well as The Legend of Zelda: Breath of the Wild. There have even been full island designs based on the furniture store Ikea. Each of these projects can take dedicated Animal Crossing: New Horizons fans hundred of hours in resource collection, crafting, and building. Despite this, the builds are one of the major reasons the game has remained popular over the past several years.

Laura Gray is a writer, illustrator and gamer in cozy Boise Idaho. They have had a wild freelance career in being a nerd, spending time traveling as a professional cosplayer and becoming a published illustrator while working the night grind as an IT tech. Laura is currently a content writer for D&D campaigns and Screenrant while working on personal writing projects for publication. They are also busy welcoming their first child into their life, which has been the best adventure life has given yet.