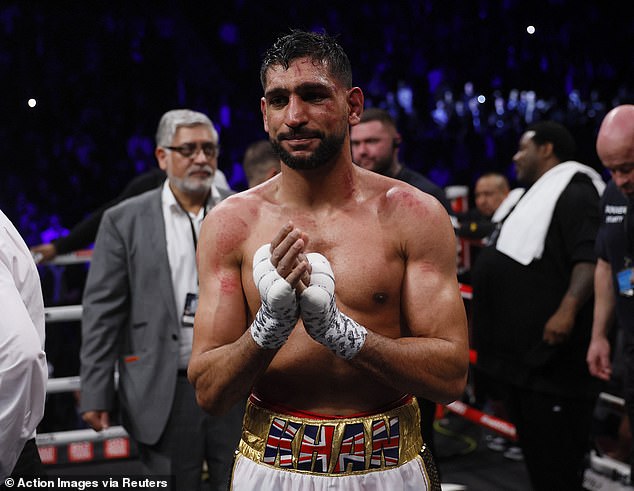 Not even in Amir Khan’s wildest dreams could he have envisioned his showdown against Kell Brook playing out the way it did.

Following years of verbal jabs, homophobic slurs, and every curse word imaginable, the British stars finally stepped into the ring against one another in an attempt to prove who was the better fighter.

A confident Khan sauntered his way through Manchester Arena late last night with pound-for-pound star Terence Crawford standing firmly in his corner. Khan started off well. He danced and moved across the ring while landing a few heavy jabs. Yet, his entire demeanor changed the moment Brook began finding him with huge shots of his own.

There was a pep in Khan’s step soon after, as he did his best to stay away from Brook’s power. With his legs wobbling from each blow and with the former Olympic silver medalist running out of room to move, referee Victor Loughlin mercifully shook his head and stepped in to save Khan from further punishment.

While he was all smiles shortly after, embracing Brook in the center of the ring and officially putting their rivalry to bed, on the inside, Khan was apoplectic.

“I’m very upset,” said Khan to Sky Sports Boxing following his defeat. “I just couldn’t get it going you know, falling a little bit short, was missing quite a lot.”

The loss for the 35-year-old Khan places him in a difficult spot. At one point, he was one of boxing’s biggest stars. While his name still remains amongst the most notable in the sport, his overall game has eroded.

Admittedly, the hand speed is still eye-catching, the footwork is still there, and the punching power is still respectable. However, the desire to bite down on his mouthpiece and fight through the fire that boxing presents isn’t.

As Khan looks back on his career, he smiles proudly. His waist has been laced with world title gold on multiple occasions and his neck still bears his 2004 Olympic silver medal.

But, despite all that he’s accomplished, Khan feels a sense of apathy when discussing the sport of boxing. Considering everything he’s accomplished, he now realizes that Brook may have just pushed him over the retirement finish line.

“40 fights, a lot of fights. Winning two world titles, fighting up and down in America and around the world. I need to sit down with my family. But I think it is more towards the end of my career. Obviously, that love of the sport is not there anymore. I used to have that excitement and that push but I just didn’t have it in me. I felt quite flat. I think that’s maybe a sign for me to know that maybe I should be calling it a day maybe but let’s see.”