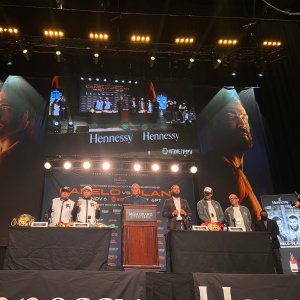 The official press conference before Saturday’s fight between Saul “Canelo” Alvarez and Caleb Plant had a calm atmosphere despite the tension that has arisen in recent months on the part of both boxers.

Both the Mexican and the American made their speeches to the press, who attended the event in large numbers, and talked about the latest preparations for their clash for the WBA Super Middleweight Super Championship and the WBO, IBF and WBC belts.

With the four belts on the tables, the media listened to the words of the protagonists and their teams, in addition to the interventions of the promoters of the event to be held at the MGM Grand in Las Vegas this Saturday night, November 6.

Canelo spoke about his desire to keep all the belts and put on a great show in Sin City as the boxing great figure he has become in recent years.

For his part, Plant highlighted his tools in the ring and how they can cause problems for Alvarez in the fight. He also assured that he is coming to win and that is the only goal he has for this fight.

With the press conference completed, all that remains is for them to step on the scales this Friday. Both must mark the 168 pounds of the division to be qualified for one of the great fights of 2021 and that will define the undisputed champion of the category.