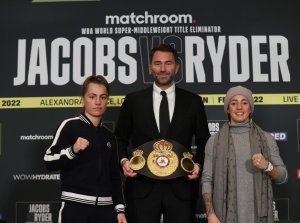 Both fighters were present at the last press conference of the Matchroom Boxing event, which will feature the super middleweight eliminator between Danny Jacobs and John Ryder.

There was much debate surrounding Scotney’s short record in comparison to the visiting Argentinean Guanini. Although the Brit is the favorite in the fight, she will be facing a former world champion and the local fighter has just three fights on her record, so there are doubts in the air.

“This is a fight that is going to ask questions but I’m going to send the answers,” Scotney said of the situation.

Guanini said she had a lot of preparation for this fight, unlike her fight against Rachell Ball in 2020 and that’s why she feels confident.

“Whenever I go up on top of the ring I go to war. That’s what I’m willing to do, I came for that title and if it’s God’s will I’m going to take it”, assured the South American.

Tomorrow they will step on the scales and will be ready for their Saturday showdown for the WBA regional crown.