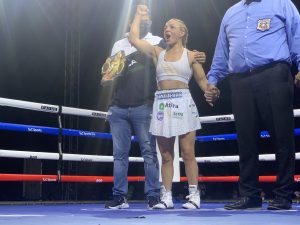 Yessica Bopp was named Fighter of the Month by the World Boxing Association (WBA) Championships Committee after defending her WBA Women’s Bantamweight crown on October 22 in Barranquilla, Colombia.

The Argentinian scored a four-round technical knockout over Venezuelan Johana Zuniga and retained her championship in her return to the 108-pound division.

Bopp looked forceful, motivated and gave a great show to the public present in the coastal city of the South American country.  The 37-year-old veteran gave a blow on the table and wants to measure herself against the great rivals of the division as she has done throughout her career.

Along with the award to Bopp, the WBA published the women’s ranking for the month of October. The same can be found in the corresponding section of the pioneer organization’s website with all the movements related to the tenth month of the year.