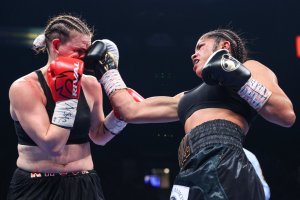 The great conquest of more than a year ago, has been defended tooth and nail. Jessica “CasKilla” McCaskill retained her World Boxing Association welterweight belt against Canadian Kandi Wyatt. The fight ended in the seventh round by decision of the judge and thus, McCaskill, kept the full reign at the MGM Grand Arena in Las Vegas, Nevada, United States.

With little respect for the owner of all the belts in the category, Wyatt advanced at the beginning of the fight with the impetus of wanting to assert her chance under the lights of Las Vegas. However, the fierceness and voracity of the American “Caskilla” did not even give her the chance to breathe to reassemble the fight plan that vanished at the first bell.

McCaskill conquered the full 147-pound belt when she defeated the legendary Cecilia Braekhus for the first time in August 2020. She surprised without convincing much, and by arranging a rematch at the beginning of this year, she ended the underestimations towards her boxing.

Wyatt, was unresponsive against the constant barrage of powerful punches to the soft spot and face. Her bravery kept her on her feet until the referee’s final “stop”.

This is how the American ranked among the best pound for pound of the moment extended her record to 11 victories with 4 quick finishes and 2 defeats.