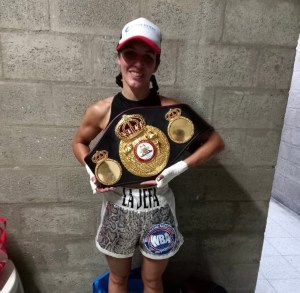 With immense emotion, the Argentinean representative Jazmín “La Jefa” Villarino, won the World Boxing Association minimum gold championship. The victory came after the decision of the rival Yenifer Leon, not to come out to fight in the seventh round. This was the featured fight on Saturday night at the Coliseo Zona Norte in Sabaneta, Colombia.

The contest began in an entertaining way when the Venezuelan fighter, “La Negrita” Leon, used her experience and strategy to keep the distance and apply the offense when she found the opportunity. Then, both fighters began to hold center stage in the exchange.

Despite Leon’s challenge, Villarino managed to overcome the Maracay-born with physical strength and a greater volume of assertive punches such as those in the mid-zone to close the sixth round and lead Leon to decide that that was as far as she had come.

Jazmín Villarino is 31 years old and was born in Bariloche, a city in the province of Río Negro, in southern Argentina. She then traveled with her family to Spain where she grew up and fell in love with boxing. When she returned to Argentina, she harvested a fruitful amateur career. In addition, she has been a mother since 2018 and teaches in gyms.

The Gold belt of the pioneer entity is the first big step to position herself within the high professional level in the world.