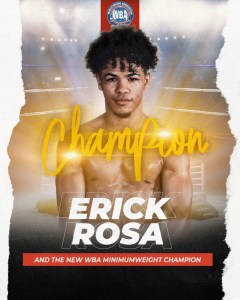 Erick Rosa fought hard  for 12 rounds and showed his people what he is capable of doing by defeating Victorio Saludar by split decision to win the World Boxing Association (WBA) minimum belt at the Catalonia Hotel in Santo Domingo, Dominican Republic, on Tuesday night.

The 21-year-old did not have an easy task against the former world champion Saludar, but in the end he won the 116-109, 112-113 and 113-112 scorecards, with which he won the black and gold belt of the oldest boxing organization

With only four professional fights, the southpaw fighter knew what it was like to get up from the canvas and continue with his momentum in a fight of this level to overcome a big test. The Dominican knocked the Filipino down in rounds 3 and 9, but visited the canvas in the tenth, so he had to put in an extra in the clinch.

Rosa walked the ring, worked well with his left hand and used his waist well to avoid strong attacks from Saludar. In spite of all the difficulties he was in, he managed to prevail and win the crown.

“Minipacman” won his fifth professional fight, one of which ended by knockout. For his part, Saludar dropped his record to 21 wins, 5 losses and 11 knockouts.