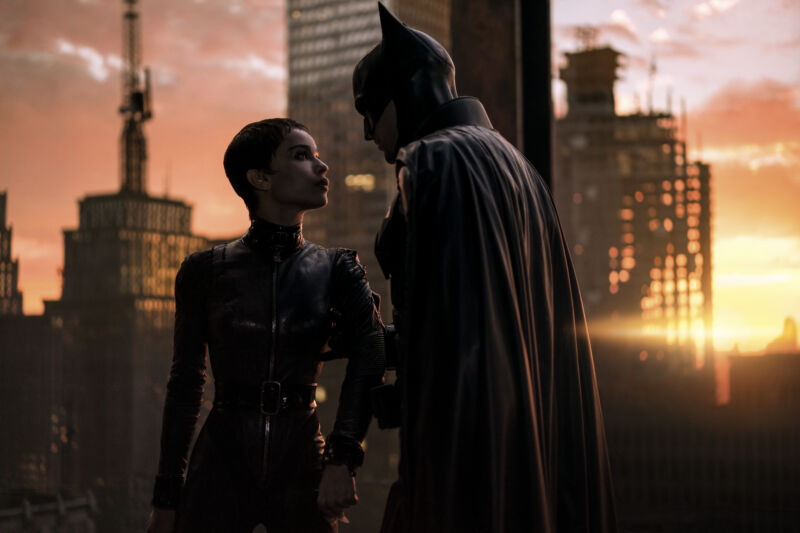 he Batman is a DC Comics film for people who watch way too many movies.

Director and co-writer Matt Reeves (War for the Planet of the Apes) has concocted an intoxicating mix of indulgence, pulp, bombast, and vulnerability that absolutely answers the question of why the world needs another Batman film. Even better, Robert Pattinson (The Lighthouse) resurrects a role that has been otherwise run into the ground.

“I am the shadows”

You’ll have to endure roughly 15 minutes of aggressively grimdark tone setting before Reeves and Pattinson alike settle into their vengeance-filled Batusi dance.

But let’s set aside the production’s bloated length and occasional foibles. Pattinson brings surprise and heart to a version of Bruce Wayne that sounds insufferable on paper. The Batman‘s Batman is a relatively new caped crusader, only two years into his transformation from idle trust-fund kid to determined Gotham vigilante. In this vision of the classic tale, divorced entirely from other DC comic-to-film timelines, Batman isn’t doing so well. Cops relentlessly mock him, and crime stats have only gotten worse since he turned vigilante.

Yet Batman’s nonlethal crime-fighting prowess, as bolstered by Wayne Enterprises-grade toys, has earned him two admirers. One is Commissioner Gordon (Jeffrey Wright, The French Dispatch), who has rigged up the iconic Bat-Signal when he needs help with difficult cases. (How’d an unidentified dude in homemade, bat-shaped armor get so cozy with a public official? We never get an answer, although it is funny to hear Gotham’s cops ask this question for once.)

Batman’s other admirer is a murderer who leaves rhyming riddles and cypher-filled codes at crime scenes. He’s never called Riddler in the film, but I’ll use the moniker for simplicity’s sake. The Batman begins with his latest crime.

“The bat and the cat—has a nice ring to it”

From there, The Batman dives into three parallel detective stories: stopping the Riddler, finding the key figure in a massive Gotham corruption ring, and protecting an innocent woman caught in the crossfire. The third plot is how we get to Selina Kyle (Zoë Kravitz, Hulu’s High Fidelity), since the innocent woman in question is her friend. Kyle (aka Catwoman) often appears at just the right time to discombobulate Batman when he’s trying to be his most stoic. Kravitz laps up her camera time as a cat burglar, and Reeves frames her stealth, combat, and acrobatics in ways that emphasize her strength and don’t-need-help badassery instead of falling into other portrayals’ dated sex-kitten trappings.

Sadly, The Batman wastes some of Kravitz’s quality performance by forcing her and Bats into a will-they-or-won’t-they romantic subplot. Sure, the sparks that fly between them demand a fire-safety warning. But that’s not enough. This subplot nearly gets a massive payoff that I’d spoil if I described it, but after this wrinkle is teased, Reeves saves it for later by tucking it into his filmmaking pocket.

What Reeves is really interested in is showing us a very different kind of Bruce Wayne than in other films: millennial, rich, sullen, ineffectual, and bewildered. Other Batman actors have shrugged off the weirdness of a rich man turned masked vigilante, but Pattinson convincingly wrestles with his inherited privilege—and makes Wayne more likable and empathetic as a result. Sometimes, in the absence of exposition or dialogue, Pattinson and Reeves sell these Wayne character qualities with little more than a tight zoom on Bat’s masked mug. The bottom of Pattinson’s face deserves its own Academy Award.

Bursting through fire like a bat out of hell

Grimdark can go very, very wrong (see: any theatrical cut of a Zack Snyder film). But The Batman is not without its dollops of dark humor. Cops crack jokes at Batman’s expense.

Also, Reeves goes buck-wild with the film’s action sequences. One unbelievable, pitch-black fistfight only lights up when Batman’s foes aim and miss.

Hanging himself with an auteur’s rope—but that’s OK

The Batman errs on the side of letting Reeves have his indulgent way. Its fakeout ending sees actor Paul Dano (There Will Be Blood) hitting his stride in portraying the Riddler. The Riddler dances with the camera while his twisted version of reality crashes down in a way that’s om-nom-nom delicious. I would have been thrilled to see the film cut to black at this point; it leaves another character in a darkly hilarious twist, which I won’t spoil.

It’s also an ugly, badly framed scene—a rare exception in an otherwise glorious film. To its credit, the sequence sets up a single, beautiful moment that raises a middle finger to the villainy and nihilism that a certain recent DC film seemed to embody. After that scene, three more throwaway scenes come and go, all seemingly in service of the Next Big DC Film.

So it’s not a perfect Batman production. Just remember to prepare your NASA-grade diaper or a RunPee reminder.